They say you only get one chance to make a good first impression.

New Winnipeg Jets goaltender Laurent Brossoit took that old saying to heart, posting a sparkling 39-save performance in the Jets preseason-opening 2-1 win against the Minnesota Wild Monday night. While one preseason victory does not a backup battle win, he nonetheless made a strong opening statement on why he should be the man to back up Connor Hellebuyck with his performance.

Brossoit Steady and Sturdy in the Crease

If anyone was keeping a checklist of assets they wanted Brossoit to display, you can bet they’d ticked off every box by the time the last second ticked off the clock. 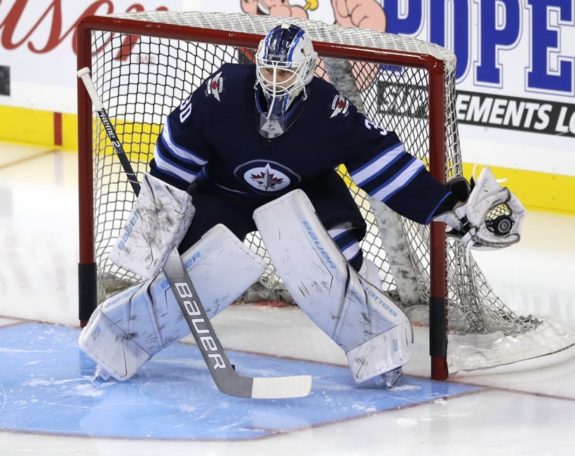 The 25-year-old was cool as Portage and Main in mid-January and looked like a veteran of a number of NHL seasons rather than a relative neophyte of only 28 career games.

Brossoit showed patience and poise throughout the game and at no point looked panicky despite facing a number of excellent scoring chances. The only goal he allowed on the night — to former Jet Matt Hendricks early in the third period — came as the result of some muddled own-end play by defencemen Ben Chiarot and Sami Niku, who were out along with Jack Roslovic, Mathieu Perreault, and Kristian Vesalainen. Despite being in his first game action with a new organization, he didn’t scramble around or look overly amped up.

Instead, he used on his 6-foot-3, 200-pound frame to his advantage. His movements were economical and he didn’t overcommit to shots or passes. He was positionally sound and looked splendid down in the butterfly when chances came from in close, especially during the first period when the Wild peppered him with 14 shots. Because he was so quiet in the net, he made a number of difficult saves look fairly routine.

His overall play was rather akin to the play style Connor Hellebuyck’s become so well-known for. In fact, Winnipeg Free Press sportswriter Mike McIntyre reported in his postgame recap the two goalies share the same trainer.

Brossoit Stepped up When Needed

Despite making most of his saves look routine, Brossoit also challenged when necessary. He made key saves that bailed out the defensive miscues that are par for the course when a team is experimenting with young players and new line combos.

He denied Justin Kloos on a pair of breakaways — including one that came after Sami Niku got caught too deep in the offensive zone — and also made a great pad save on Jordan Greenway off the rush. His best save, however,  came when he flashed the leather and robbed Ryan Murphy’s sizzling slap shot from the circles midway through the third period. It kept the game tied 1-1 and ignited a fairly placid preseason crowd.

“Any time you come into unfamiliar territory, you want to make a good first impression to instil a bit of confidence within yourself and with the team as you try to facilitate unity,” Brossoit told reporters after the game.

“I was pretty nervous to start,” he admitted, but continued on to say that facing early shots allowed him to get into a rhythm and feeling comfortable within “two or three minutes.”

Brossoit opened with a very strong early bid. If Eric Comrie wants to keep pace in the race, he’ll have to dig deep into his pockets.

Brossoit’s opening game performance has set the standard high. If Eric Comrie wants to keep pace in the backup race, he will have to be very sharp. (Dennis Wierzbicki-USA TODAY Sports)

Comrie will have to play better — not just as good — if he wants to begin the season as the number-two net minder. If Brossoit is sent down to the Manitoba Moose, he has to clear waivers, while Comrie is waiver exempt.

Comrie will likely get the start against the Edmonton Oilers on Thursday and the pressure will be on him to replicate Brossoit’s no-panic play style  — something the 23-year-old hasn’t done in his four career NHL games. Comrie can’t afford to miss this opportunity and competition usually begets quality. We’ll see soon enough if this is the case.

If Comrie doesn’t rise to the task and Brossoit puts in another performance similar to his debut in his next crack at the crease, the battle of the backups could be over sooner than many thought.