The amount of attention draft picks get varies wildly. They’re heavily highlighted in the weeks leading up to their draft, staunchly scrutinized as they are selected and much-ballyhooed as they strut their stuff at prospect showcases and development camps. However, by the time October comes and the puck drops on any given regular season, the majority of fans forget all about the players their team selected just a few months prior (unless that pick is NHL-ready like Auston Matthews or Patrik Laine). 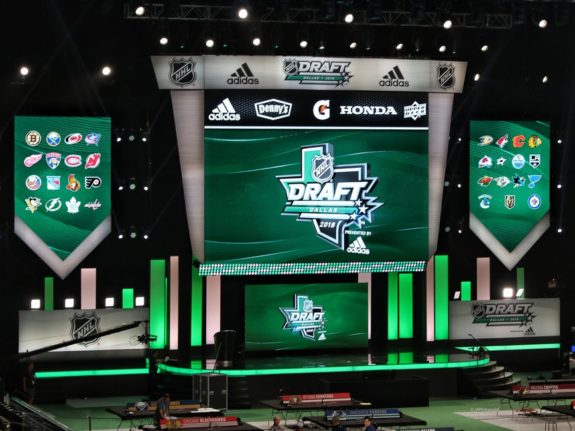 Have you forgotten to keep tabs on the players the Jets selected at the 2018 NHL Entry Draft in Dallas? (Amy Irvin / The Hockey Writers)

Given the Winnipeg Jets are on their league-mandated bye week — which runs into the 2019 All-Star festivities — it’s a perfect chance to check in on their six 2018 NHL Entry Draft selections and see how they’re doing on their respective clubs.

Gustafsson, chosen 60th overall and the Jets’ highest pick of the 2018 Draft (they traded away their first-rounder to the St. Louis Blues in exchange for Paul Stastny just before the 2018 Trade Deadline), is in his second season with HV71 of the Swedish Hockey League. 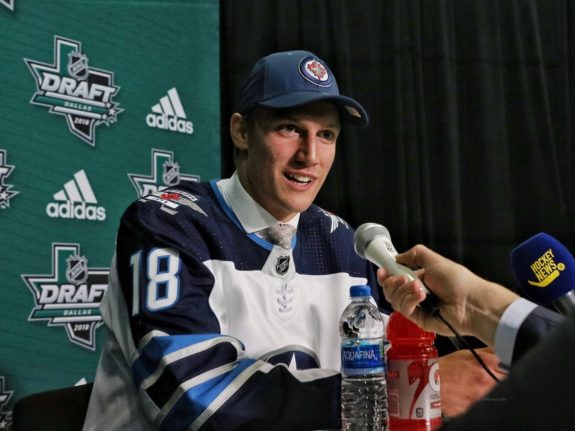 David Gustafsson, seen here at the 2018 NHL Draft in Dallas, is in his second season with HV71. (Amy Irvin / The Hockey Writers)

The 6-foot-2, left-handed centre, who has been described by Elite Prospects “an all-substance no-flash type of prospect” with “great role player qualities,” hasn’t exactly been lighting it up offensively for the team, with no goals and four assists in 18 games while averaging around 14 minutes per game.

However, keep a few things in mind: he’s only 18, is playing against much older and experienced players and is mostly playing a bottom-six role. While he likely won’t become an elite scorer, he is continuing to develop into a well-rounded two-way player. A native of Tingsryd, Sweden, Gustafsson was one of three Jets’ prospects to represent their countries at the 2019 World Junior Championships, where he tallied three assists in five games.

The 20-year-old Tampa native, selected 91st overall, is in the midst of putting together a successful sophomore campaign for the USHL’s Cedar Rapids RoughRiders.

Riders Power play goal! Credit this one to @smithnate66 and its 3-0 Riders!!! pic.twitter.com/6VU3CEsqey

Like the five other players selected by the Jets in 2018, Smith came to Winnipeg for the Jets’ Development Camp, but an ankle injury hindered how much he could participate.

The left-handed defenseman is having a breakout campaign in his third season patrolling the blue line for the OHL’s Peterborough Petes. Chisholm is part of the Petes’ top pair, is the team-leader among d-men with 32 points in 43 games, has shattered his last season’s total of 20 points in 47 games and is developing into a formidable figure. 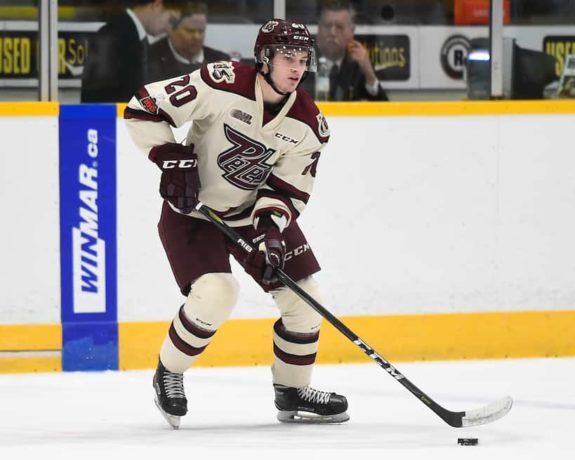 Declan Chisholm is having an outstanding campaign for the Peterborough Petes. (Aaron Bell/OHL Images)

If the observations of OHL Writer Dominic Tiago, who compiled a detailed profile of Chisholm in March 2018 are accurate, the Jets should be very excited to have been able to grab Chisholm 150th overall.

Chisholm is an excellent skater with excellent speed,” Tiano wrote. “He uses his edges extremely well, can change his pace in a split second and changes direction with ease. Offensively, he uses that skating ability to quickly open-up lanes and create a scoring opportunity with a shot or a perfect pass. Defensively, he uses that same skating ability to keep players close or close gaps quickly.”

“In the defensive zone, Chisholm can beat the forecheck. He makes crisp, clean outlet passes and puts the puck on his forward’s stick quickly. As his season moved along, he became more confident in his skating abilities and utilized the skill more often in skating the puck out of the zone,” Tiano continued. 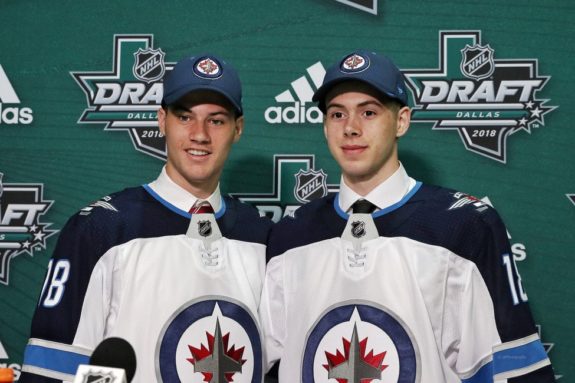 Chisholm was also selected to Team OHL for the CHL Canada-Russia Series in November. Chisholm only just turned 19, but with his dominance of the junior level, he could very well turn pro next season and find himself on the Manitoba Moose.

“We all know he is a great skater, he’s got great feet, but his gap control is really good now,” Petes head coach Rob Wilson said in November. “I remember watching some stuff where I thought we could improve his gap and he has improved on his gap. When the attack is coming in on him he’s limiting the time and space of the opposing team very well.” (from ‘Scouts noticing Peterborough Petes defenceman Declan Chisholm’s breakout year’ – The Peterborough Examiner – 11/05/18.)

Vallati, the other Jets’ 2018 draft pick in the OHL, the 6-foot-2, 193-pound defenseman is in his first season with the Oshawa Generals and third OHL season overall. He was traded to the Generals by the Kitchener Rangers — with whom he spent two seasons — in August. With nine goals and 23 assists for 34 points in 45 games, Vallati has already set a personal best in points. 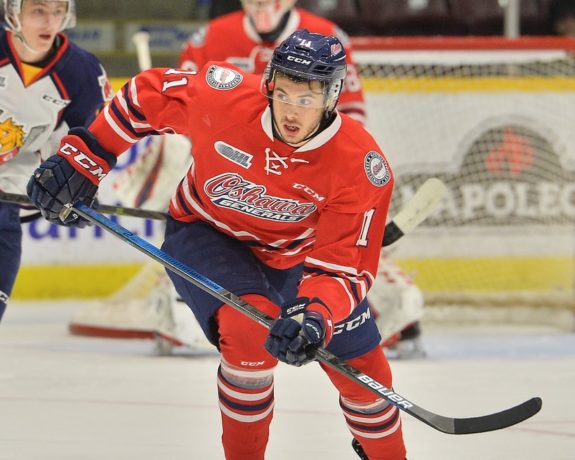 Selected in the fifth round in 2018, Giovanni Vallati is excelling in his first season with the Oshawa Generals and third OHL season overall. (Terry Wilson / OHL Images)

Tiano also profiled Vallati, calling him an “excellent skater with terrific mobility and very good speed,” someone who is “very capable of making a crisp, clean pass to exit the zone,” and someone who has the passing ability and shot to “quarterback a powerplay at the OHL level.” Check out this recent goal as an example of all his skills in action.

Like Chisholm, the 153rd-overall pick also played for Team OHL in the Canada-Russia Series. Also like Chisholm, Vallati could turn pro next season. The Jets have a great track record of finding gems in late rounds, including Connor Hellebuyck, Mason Appleton and Sami Niku.

Moe, the Jets’ sixth-round pick and the only goaltender they selected in 2018, is in his second season with the USHL’s Waterloo Blackhawks.

The big-bodied, 6-foot-3, 205-pound Minnesotan is putting together a solid sophomore campaign, with a 13-7-1 record, a 2.81 goals-against average and .905 save percentage. On Monday, he was named the USHL’s Goaltender of the Week for having a perfect record in three starts the previous week when he posted two shutouts and only allowed two goals.

USHL Goaltender of the Week and @NHLJets prospect Jared Moe recorded two shutouts in three starts over the weekend to help @BlckHawksHockey climb into a tie for second place in the Western Conference.https://t.co/W85XYN8Or9 #WhosNext pic.twitter.com/CWxGxC9egW

Moe is a few seasons away from pro hockey, as he is committed to the University of Minnesota.

Wong, selected in the seventh round and 215th overall, is in his third season with the Okotoks Oilers of the Alberta Junior Hockey League.

While Junior A is a step below a Major Junior league such as the CHL, Wong is still worth watching. The right-handed forward has put up 23 goals and 27 assists for 50 points in just 35 games. He is also tough customer who doesn’t shy away from on-ice antics, having racked up 502 penalty minutes in his Oilers career and 117 this season alone.

After the 2018 CJHL Top Prospects Game, The Draft Analyst’s Steve Kournianos wrote “his hands and reflexes help him collect bouncing pucks and make clean transitions from skate to stick. He’s probably not as good a playmaker as Sean Avery or Darcy Tucker were at this stage of their development, but Wong plays a similar abrasive style that beats you in a variety of ways.”

Wong, like Moe, is a few seasons away from potentially turning pro as he’s committed to Harvard University.

Yes, it’s hard to take your focus off the Jets and their quest for their first Stanley Cup. However, make sure you spend a moment or two every few weeks checking in on how these young prospects are faring, because they could very well be key contributors just a few seasons down the road.