There’s no questioning Kyle Connor’s contributions to the Winnipeg Jets’ 52-win 2017-18 season. The 21-year-old exploded onto the scene last year, posted 31 goals and 26 assists in 76 games, and quickly became one of the Jets’ most dynamic and dangerous players. 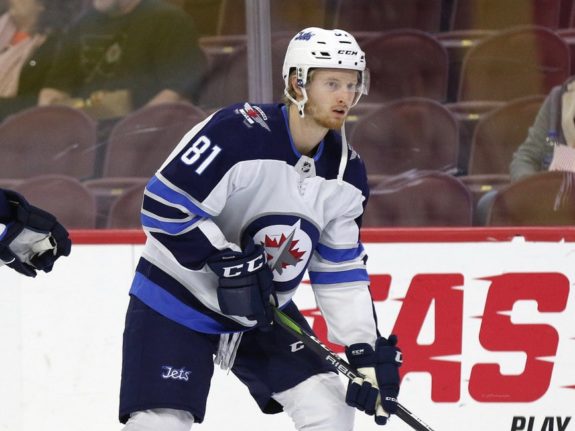 The question leading into this season is what Connor will do as an encore to his Calder Trophy-nominated campaign and whether he will regress. After analyzing a number of factors, it’s clear Connor’s season was no fluke and all indicators point to his success being sustainable.

Connor Part of a Terrific Trio

A big part of Connor’s success last season was due to his chemistry with his linemates, Blake Wheeler and Mark Scheifele. It’s hard to overstate the importance of the Jets’ top line. In 2017-18, they were strikingly in-sync, combining for 208 points, which represents more than 28 percent of the Jets’ 735 total points tallied by 28 different skaters (those 735 points don’t include the four assists notched by three Jets goaltenders.)

Connor assisted nine (39.13 percent) of Blake Wheeler’s goals and four (17.39 percent) of Scheifele’s goals. Wheeler and Scheifele fed Connor plenty of apples as well, accounting for both assists on seven (22.5 percent) of his goals. 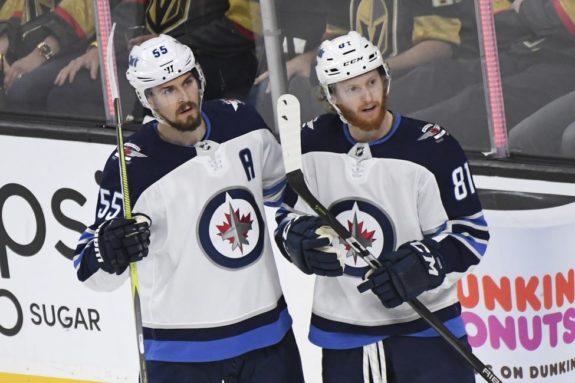 When Connor joined Wheeler and Scheifele, the Jets’ top line quickly became one of the most feared and productive in the entire NHL. (Kirby Lee-USA TODAY Sports)

What’s even more spectacular about those numbers is that Connor didn’t join Wheeler and Scheifele full-time until November, and also that Scheifele was limited to 60 games due to an upper-body injury. It’s tough to fathom that one year ago, Connor was with the Manitoba Moose and just trying to earn another shot at the big leagues. After the injury bug bit Mathieu Perreault, Connor got his chance and made the most of it. He completes the top line like parmesan cheese completes a plate of spaghetti. (You can debate whether Wheeler is the noodles and Scheifele is the sauce or vice-versa.)

This year, the top line is set in stone and will be together right from the get-go. There will be no feeling-out process or learning curve for Connor this time around. Wheeler and Scheifele looked prime in the preseason, and even though Connor played in just two tune-up tilts due to a minor neck injury, he looked ultra-comfortable with his bosom buddies, tallying two points, including a goal on lightning-quick release after receiving a Scheifele backhand pass.

The line is lethal in a litany of ways. They produce chances on the rush and in transition. They create turnovers. They have a near-supernatural ability to know exactly where each other are on the ice. They cycle the puck at a dizzying pace. They snipe like sharpshooters. Keying on one doesn’t work — all three can burn their opposition at any time. Double-teaming one just means the other two guys have more space to wheel and deal.

If Kyle Connor’s skill set was a suit of armour, it’d be chink-free. Analysis of the left-winger’s assets and underlying statistics show his clip, which he’ll be looking to surpass this year, is sustainable.

First and foremost, the 6-foot-1, 180-pound forward has a great, often freakishly-accurate shot. He only needs a split-second of space to find twine.

Kyle Connor with the laser which took the Jets to OT an earned the single point.#GoJetsGo #VGKvsWPG pic.twitter.com/wNusTwbwzB

His shooting percentage was an eye-popping 16.1, which, often, would be a tough mark to replicate. However, an analysis done by Sportsnet.ca’s Andrew Berkshire last March shows, for Connor, a shooting percentage in the mid to high teens could be repeatable. Berkshire’s analysis revealed Connor is in the upper echelon of all NHLers when it comes to producing high-danger scoring chances and 5-on-5 opportunities.

“Based on the sheer number of scoring chances Connor generates, and the ability of his most common linemates to get him the puck in a shooting position, it may not be so abnormal for him to sustain his sky-high shooting percentage,” Berkshire opined.

In late August, NBC sportswriter Adam Gretz wrote “if there was any sort of a red flag for Connor it was the simple fact he didn’t generate a ton of shots on goal and had a fairly high shooting percentage, two developments that could indicate he might be due for a regression. But even that is probably a reach. If you look at comparable performances from recent NHL history it paints a pretty strong picture for what Connor could be capable of in the future.” 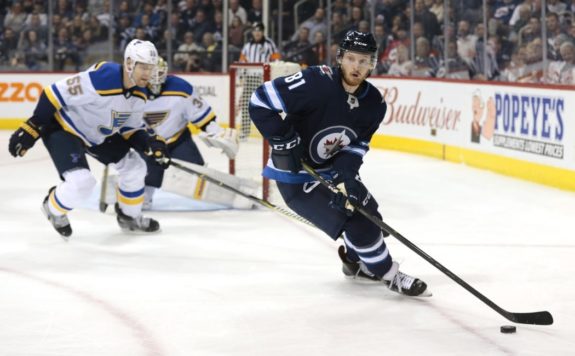 Part of producing scoring chances is being sure one’s shot attempts actually get on net and Connor excelled at that as well. 66.7 percent of his shot attempts went on goal, tied for best on the team.

Connor, in general, is a picture of consistency. He produced a point in 37 (48.68 percent) of his 76 regular season games. He largely avoided long scoring slumps, his longest drought being a six-gamer between Mar. 2 and Mar. 12.

Lastly, Connor is clutch. Seven (22.5 percent) of his goals last year were game-winners, which included three overtime winners in a two-week span. Having a player who plays his best in the biggest moments is of immeasurable importance.

Connor Is Capable of Even More

If Connor, Wheeler, and Scheifele are relatively healthy this year (Jets fans, take a break from reading and find some wood to knock on), Connor could easily up his point total to 70. He knows he will have to find an even higher gear and continue to grow if he wants to reach that threshold, though.

“It’s just continuing to grow and learn from those two,” Connor told Winnipeg Sun sportswriter Ken Wiebe in mid-September. “They’ve been so great and so intelligent about the game and their preparation. Just try to take my game to the next level. I like to play the game fast. I think speed is one of my greatest assets. For me, it’s (about) moving my feet and staying engaged and staying on the puck.”

Wheeler thinks Connor can achieve even more, as well.

“He’s got the ability to be one of the best offensive forwards in the league…” Wheeler said. “He’s that type of person, with that type of drive. The things he can do with the puck, the way he sees the game offensively, the way that he skates, he’s as dynamic as they come. We’re lucky to play with a guy like that.”

It’s Jets fans who are lucky to have such riches on offence and so many potentially game changing players.

Connor’s encore performance is just one reason to keep close tabs on what should be an exceedingly exciting season of Jets hockey, a season that gets underway Thursday in St. Louis. Indeed, Connor’s campaign, by all indications, should be highly productive and the year he transitions from a “young gun” to a bonafide big gun.