If he wants to coach in the NHL again, Barry Trotz will find plenty of offers. The Jets may need to move quickly and alter the “extensive search” strategy that they’ve been preaching since announcing a new head coach will be hired for the upcoming season.

Trotz is the Perfect Fit for the Jets

Trotz has been a head coach for 23 NHL seasons in Nashville, Washington and most recently on Long Island. In that time he has amassed 914 regular-season wins, 3rd in NHL history and has a Stanley Cup to his credit. His credentials go beyond what other potential candidates could cite and now thanks to the Islanders, he’s available. He comes with notoriety, a reputation for commanding the locker room and is a great teacher with a lockdown defensive system. The Jets currently have a serious need for discipline, accountability and some semblance of a defensive system. The match seems to make sense.

Assuming Trotz wants to coach next season, there would be no greater move from Kevin Cheveldayoff this summer from a selling hope standpoint than hiring him.
Proven winner. Defensive guru. Stanley Cup champion.

The Jets have been inept in their own zone for the past two seasons which has not been a secret around the league. After a 4-2 win in Winnipeg, Boston Bruins’ head coach Bruce Cassidy mentioned to the media that the key to defeating the Jets was to pressure them in their own end.

‘’We talked about getting to the interior against Winnipeg, they have some smaller defensemen, a couple of really big ones, but some smaller ones, and statistically, they don’t defend the slot that well for whatever reason.”

Trotz’s defensive system is predicated on protecting the very thing the Bruins coach found a Jets’ weakness… the slot. The season before he took over, the Islanders gave up 293 goals which in 2017-18 was the worst in the NHL. The very next season, his first with the team, he reduced their goals against to 196 a complete turnaround and incidentally the best in the NHL. Worst to first was an incredible transformation that happened to be more about teaching than coincidence. The Jets are a team that can score but cannot defend. The Islanders defended well this season but had trouble scoring, one component that led to Trotz’s dismissal in a season the club was picked by many pundits to be in the Stanley Cup Final.

In the four years he coached the Washington Capitals, his team had a goals-against average (GAA) of 2.45 which was second in the NHL over that period. In the four years he was with the Islanders, they had a GAA of 2.56 which was also the second stingiest record in the NHL. In the eight years since leaving Nashville, Trotz has coached two different teams with a defensive system that won a Stanley Cup with Washington and then took the Islanders to the Conference Final the past two seasons. In that same time frame, the Jets allowed 218 more goals than the Trotz-lead teams. That’s significant, and with Winnipeg’s ability to create and score, how does Trotz not make perfect sense behind the Jets bench?

Trotz is a native of Manitoba, once calling Dauphin home, and both playing for and later coaching the Dauphin Kings of the Manitoba Junior Hockey League winning the Anavet Cup in 1983. He also spent a few seasons in the ’80s coaching the University of Manitoba Bisons.

He understands the difficulty of being in a small market that is not free agent-friendly. The Jets’ infrastructure has always been built on stability and loyalty. Who knows this better than a man who for 13 seasons was the first and only coach for the expansion Nashville Predators. 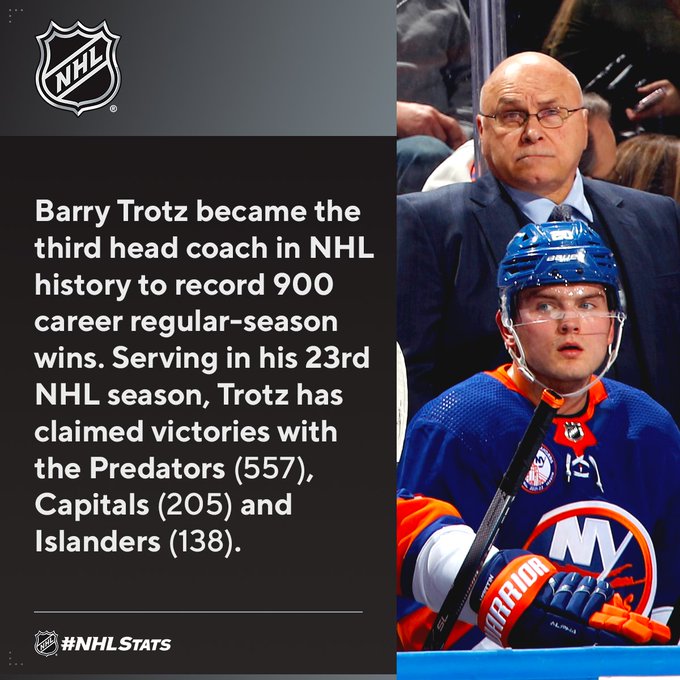 True North Sports & Entertainment, who owns the Jets, have demonstrated they appreciate stability and loyalty. They’ve demonstrated through lengthy contracts with former head coach Paul Maurice (eight and a half seasons) and GM Cheveldayoff (the only GM this version of the Jets has employed) that they prefer to build on a premise of longevity and patience. Trotz has succeeded under that same system with his former GM David Poile in Nashville, and it worked as they took that franchise from the ground up to a playoff contender.

Trotz Would be Worth the Price

There’s no doubt Trotz would come with a hefty price tag. He was scheduled to earn $4 million next season with the Islanders, but Maurice was making $3 million per season before he resigned in December. The extra million or more that it would take to get Trotz behind the bench would be worth it for a number of reasons.

For the first time since the Jets returned to Winnipeg 11 years ago, the front office needs to sell tickets. The disappointed fan base did not regularly sell out Canada Life Centre this season as it had in the previous 10 years, and signing Trotz would go a long way to filling those empty seats, by repairing faith and hope. It would also send a message to the fans and players alike that they are not rebuilding as some suggest, but looking to be immediate contenders as the front office has repeatedly stated.

The Jets do not attract free agents on a regular basis, it’s not a destination elite players want to sign, and Cheveldayoff has built this team through the draft and trades to a point where on paper, they should be a Stanley Cup contender. What they were missing this year was a coach with a defensive system and that could improve the culture behind the scenes. Trotz can supply that, and if they were to sign him, you could look for a quick turnaround in 2022-23 from an already offensive-laden roster, with elite goaltending. It’s a match made in NHL heaven.

Keith Forsyth is a freelance writer and sports junkie from rural Manitoba who is covering the Winnipeg Jets for The Hockey Writers.  Keith loves all sports and is a huge fan of the NFL (Skol Vikings… if you know, you know) and the Montreal Expos (they’re coming back… you watch!). He recently retired from the education world teaching high school, where his greatest passion was coaching young athletes.  He brings that same logical, behind the bench type of approach to you as he delivers an insightful look into the NHL and specifically the Jets.  For interview requests or content info, follow Keith on Twitter or his social media accounts.  They appear under his photo on articles like this one.