Disappointed is the kindest way to describe the 2021-22 season for Winnipeg Jets fans. After the season-ending victory over the Seattle Kraken on Sunday, there were a couple of Jets players who were very candid during their media availability, and nothing short of blunt. In essence, there was a “me” versus “we” theme that developed in front of the media, and it appears this public debate was spillover from earlier internal problems on the Jets’ last road trip.

I’m told there was a heated players-only meeting last month in Florida, after the Jets had been outscored 13-5 by the Panthers and Lightning on back-to-back nights, where plenty of voices were raised and grievances aired. No coincidence that the truth bombs started getting dropped publicly following the Tampa Bay loss. It’s as if some on the team realized they were banging their heads against a wall, deciding to take their cries for help to the media.

After the game on Sunday, one player commented about his individual needs and what was best for himself, while another suggested players needed to sacrifice a little for the greater good of the cause. What conclusion can fans draw other than there must be some palpable tension behind the scenes.

Scheifele is Looking Out for Himself

After Sunday’s game, Mark Scheifele was asked about wanting to remain in Winnipeg as the team looked forward, and he gave an incredibly egocentric response. “I have to think about my career and what’s going to be best for me. Those are going to be … talks with my agents and everyone in my family (to) figure out what I really want.”

Scheifele was offering comments that you would expect from a pending Unrestricted Free Agent (UFA), and not someone with two more years of term left on his contract. Was he asking for a trade? Could he be telling the public he doesn’t appreciate head coach Dave Lowry and wants a change there? The fact remains Scheifele is locked into a very team-friendly contract at $6.125 million per year, and dealing him to another team in the offseason would be one of the easiest moves GM Kevin Cheveldayoff could ever make. Getting equal value in return might be another issue.

Quite a fascinating availability with #NHLJets Mark Scheifele, who is under contract for two more years but sure didn’t sound like it. Spoke of talking to his agent, a “tough” year-end chat tomorrow with Kevin Cheveldayoff and needing to think what’s best for his career. #wfp

NHL Insider Elliot Friedman was asked by Sportsnet’s Sean Reynold on the Kenny & Renny podcast what the market for Scheifele would be in the offseason and he the replied with, “It’s going to be big. The market will be big. Scheifele will be motivated, he’s only got two more years left at $6.1 million. Everybody can handle that contract that’s gonna want to handle that contract. It’s going to be a big market… very big market. You can’t find top two centres in this league… can’t find them.”

Moving the 29-year-old forward would not pose much of a task for Cheveldayoff, and Scheifele and his representatives know that. The burning question it creates is, would it be the best move for the team? He is a perennial point-per-game player which is hard to find, but the Jets could get a king’s ransom for him.

Cheveldayoff has publicly announced they are on the hunt for a new coaching staff… sort of. They’re not promoting Lowry from interim to head coach, but they are going to grant him an interview. That’s just odd in itself. Consider Lowry as good as gone. He won’t be behind the Jets’ bench next year, because what the Jets need is a hard-nosed coach who understands how to get the best out of the players while holding them accountable for their actions.

Does that mean Scheifele would be more agreeable to staying in Winnipeg and playing more defensively responsible under a new regime? Does it mean if the Jets find a coach who can keep the players culpable for their play, he works at becoming a better two-way player? His words suggest he wants out under the current situation, but what about someone new? It’s going to be an interesting puzzle for the Jets to piece together this summer.

Stastny Gave the Opposite Opinion

While Scheifele was commenting on how he has to look out for himself in the offseason, Paul Stastny was painting another picture. In his final media appearance of the season, he boldly interrupted Jets’ Captain Blake Wheeler, who was asked about the Jets finding a defensive system and how to make it work.

“We’ve got to be held accountable — whether it’s player on player — and we’ve got to have more respect for each other. When you don’t have that, when you don’t care about the teammate next to you — potentially — and you just care about what you’re doing or certain individual things, that starts bleeding into the game… You also have to have self-awareness and realize sometimes you have to sacrifice a little for the greater of the team.” – Paul Stastny following the Jets game on May 1, 2022.

Once again Paul Stastny speaks his mind about what was wrong with the Jets this season. While he never mentioned any names I can’t help but think he’s talking about Mark Scheifele https://t.co/uTdcMFD8YX 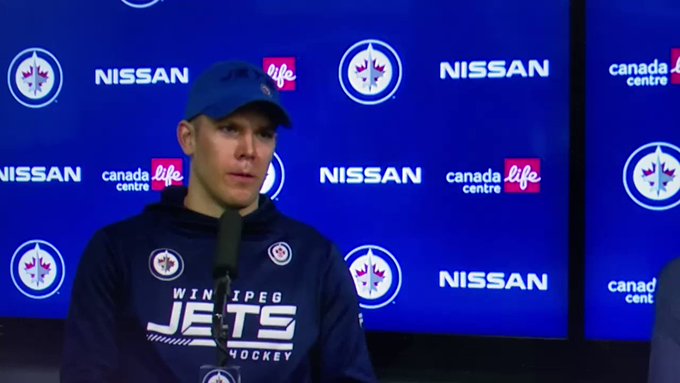 Unlike Scheifele, Stastny is a pending UFA who earned $3.75 million this season. He is 36 years old, just recorded his 800th career point against Seattle, and someone the Jets could easily let go. However, he scored 21 goals this season — the first time he’s gone over the 20-goal mark since the 2013-14 season — and he won 56.6 percent of his faceoffs, the second highest percentage of his 17-year career in the NHL. Not to mention, he was the Jets’ most versatile forward this season, sharing ice time on all three of the Jets’ top forward lines both at centre ice and on the wing.

There’s no certainty that Stastny was aiming at Scheifele, but it looks like he had him in his sights. The Jets are a franchise that traditionally take care of all their conflicts internally, and to hear players make public comments indicates there is a serious culture problem in the dressing room.

Regardless of what was truly intended by each of the statements, one thing is very clear. One of these players is concerned about the team, and one is concerned about himself. Think what you may about either player’s remarks, but there is obviously a schism in the dressing room. There is no guarantee either player will be a Winnipeg Jet next season, but if Scheifele is not on the opening night roster, I think conclusions can be drawn at that time.

Keith Forsyth is a freelance writer and sports junkie from rural Manitoba who is covering the Winnipeg Jets for The Hockey Writers.  Keith loves all sports and is a huge fan of the NFL (Skol Vikings… if you know, you know) and the Montreal Expos (they’re coming back… you watch!). He recently retired from the education world teaching high school, where his greatest passion was coaching young athletes.  He brings that same logical, behind the bench type of approach to you as he delivers an insightful look into the NHL and specifically the Jets.  For interview requests or content info, follow Keith on Twitter or his social media accounts.  They appear under his photo on articles like this one.