The Winnipeg Jets have multiple Finnish players in their organization, including Sami Niku, but many of them are still in North America as the Jets prepare for their overseas games. On and off the ice, this is a mistake.

The Jets haven’t met expectations so far this season and that has a lot to do with the way the defense has played. What was supposed to be a major strength for the Jets has at times been an Achilles heel. This presents a problem on several fronts, besides the obvious one of keeping pucks out of the Jets’ net. A good puck-moving defense is essential for getting pucks into the hands of talented forwards, and their inability to do this may explain why the Jets’ star forwards are off to slow starts.

There’s no one-step solution to this problem, but there are a few things they can do better. Getting a slick puck-mover like Niku into the lineup would go a long way.

Sami Niku has the puck skills the Jets are lacking on their back end. (Photo by Minas Panagiotakis/Getty Images)

It’s odd that any defense that includes Dustin Byfuglien, who recently scored his 500th career point, Jacob Trouba, and budding superstar Josh Morrissey would have trouble moving the puck. Yet the Jets’ bottom-three are struggling. With that in mind, calling up Niku is a no-brainer. Couple that with his Finnish heritage, and this was an easy choice for the Jets to get right. Yet they chose to leave Niku with the AHL’s Manitoba Moose.

Niku Helpful But Not a Savior

To ask Niku to solve the Jets’ woes on his own is asking too much. No rookie defenseman is going to come in and “fix” a 7-4-1 team. That doesn’t mean he can’t contribute.

There’s an argument to made for leaving him behind, it’s true. He’ll play top minutes with the Manitoba Moose, as Kyle Connor and Jack Roslovic did before him, and mature that way. He’ll certainly play more than he would with the Jets. Yet Niku is coming off a stellar season in the AHL. While he hasn’t been bad this year by any means, there’s only so much higher he can fly at that level. At times the game already looks too easy for him in Manitoba.

How badly could the Jets use a defenseman, or any player for that matter, who can make plays like the one above? We’ve talked about how Niku’s style is perfect for a modern defenseman and now is the time for the Jets to start making use of it.

His skill is only part of the equation, however. The Jets are traveling to a foreign country with only one national, Patrik Laine, on the roster. At one point, before they traded Joel Armia, they might’ve had as many as four. Now it’s down to Laine. Bringing Niku along might relieve some of the pressure on the slow-starting Finnish phenom. It might also have given the Jets a bit of an advantage on the ice and in terms of Niku’s development.

Niku Wanted to Play at Home

We see it all the time in regular NHL play: a player who has been scratched in consecutive games gets into the lineup for a game in their hometown. The Jets have done it, bringing Jack Roslovic up in time to play a game in his native Columbus in 2017. Considering that this is common practice in the NHL, a little show of loyalty to a player could have paid dividends down the line and, considering that the Jets need Niku’s skill set right now, what exactly was the advantage of leaving him behind?

On the #DonvitoRoundtable today Manitoba Moose asst. coach Eric Dubois said defenseman Sami Niku was disappointed to not be called up by #NHLJets for the #Globalseries games in Finland. The two had an almost 30 min conversation about it.

Playing on a different ice surface in a foreign country in front of a foreign crowd in a brand new time zone, it wouldn’t have hurt to get some Finnish experience in the lineup. When one of those Finns seems to be just what the doctor ordered, his recall should’ve been an easy choice. 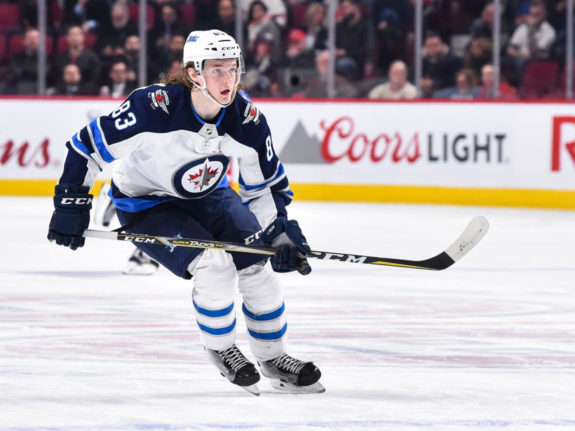 Sami Niku would have been more than just another Finnish player on the trip had he been recalled by the Jets. (Photo by Minas Panagiotakis/Getty Images)

To be absolutely clear, none of this is a knock on Tucker Poolman. Poolman has done everything the Jets have asked of him, is three years older than Niku and has been a steadier player. He also has more NHL experience. But this overseas series feels like the sort of thing that could become a turning point in the Jets’ season. For Winnipeg, it would’ve made sense to go into it armed to the teeth with the best possible options.

On and off the ice, one of those options was Niku. One hopes the Jets can gut out two wins against the Panthers. Then Niku’s absense will be a non-issue. If the Jets are swept, however, some of the decisions prior to the trip are going to get a lot more scrutiny.