If for some reason you were concerned about the chemistry between Winnipeg Jets’ star forwards Blake Wheeler and Mark Scheifele, don’t be. The duo — who comprised two-thirds of the Jets’ dynamic top line — have played well over their two preseason games, showing why the top line is the only thing set in stone when it comes to the Jets’ opening night lineup.

Wheeler and Scheifele made mincemeat of their opponents in 2017-18. Their ability to create turnovers, use their speed to generate chances off the rush, and their uncanny ability to know where each other are on the ice at all times explain their offensive output. Last year, Wheeler produced a career-high 91 points and Scheifele operated at a point-per-game clip for the first time in his career. Quite simply, they push each other to new heights.

In addition, Wheeler and Scheifele accounted for both assists on seven of Calder Trophy-nominated linemate Kyle Connor’s 31 goals (22.5 per cent). That means nearly 12 per cent of the 273 goals on the Jets’ scoresheet featured the names of both men.

The duo’s chemistry comes from a combination of familiarity and good old-fashioned hard work. They put in a lot of time working out during the offseason in order to start the preseason on the same page.

“We spend a lot of time working on it, so there’s no adjustment period,” Wheeler recently told Winnipeg Sun sports reporter Ken Wiebe. “The thought process is that quarterbacks and receivers work together during the offseason, so why not us? It helps when you come into camp like that, you build a rapport. Obviously, we’ve had some good chemistry in the past and there’s no reason we can’t keep building it.”

The duo has been excellent in a pair of preseason games. On Friday against the Calgary Flames — both players’ preseason debuts — they combined for three points. They drew slick assists on Dustin Byfuglien’s overtime game-winner, a goal that came about because Wheeler forced a turnover at the blue line. After playing give-and-go with Scheifele, Wheeler zipped a nifty cross-crease pass to Byfuglien who buried it past a sprawling Jeff Glass.

The pair was electric on Sunday in a 5-3 win over the Edmonton Oilers, combining for three goals and six points. First, they hooked up on the power play as they’ve done countless times before. Since both are right-handed, they are a dangerous option for one-timers, and they executed one of their standard plays to perfection. Wheeler, near the goal line, threaded a pass to Scheifele at the edge of the circle, who ripped it in blocker-side on Mikko Koskinen.

Next, they picked up a short-handed goal. Scheifele used his reach to force a turnover in the neutral zone and got the puck over to Wheeler. Wheeler hit Scheifele streaking toward the net with a backhand saucer pass and the centre banged it in.

They wrapped up their contributions in the third period when Wheeler unleashed a bar-down, short-side, rocket of a wrist shot during a five-on-three power play. “He looks like he’s in midseason form here tonight,” said colour commentator Kevin Sawyer in reaction to the perfectly-placed shot.

Neither Phased by Rotating Linemates

While Wheeler and Scheifele are the straw and drink of the Jets’ top line (you can decide for yourself who’s stirring who), the pair hasn’t missed a beat without Connor, who may be the ice that turns the dynamic duo into a terrific trio. 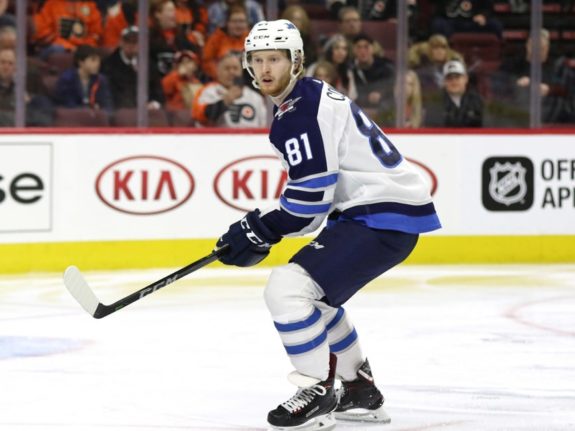 The pair weren’t phased by the absence of Kyle Connor, who was kept out of the lineup as a precaution. (Amy Irvin / The Hockey Writers)

Connor was set to dress against the Oilers Sunday night but took a puck to the neck during Sunday morning’s pre-game skate. Connor called Maurice pleading to play, but the bench boss opted to keep the left winger out of the lineup as a precaution. As a result, Kristian Vesalainen skated on the top line before being replaced by Laine in the third period. The fact that Wheeler and Scheifele produced with comparatively unfamiliar linemates is a testament to their chemistry. With the addition of Connor, the line should be as fearsome as last year.

Indeed, the Jets’ first line is just fine and looking like they’re ready to play games that count for real. Much is still in flux when it comes to the lineup, but the Wheeler-Scheifele combo should be a lock. Why fix what isn’t broken?