The puck will drop at Bell MTS Place for the first time in the 2018-19 regular season on Tuesday as the Winnipeg Jets face the Los Angeles Kings.

Before that, take a quick look back at the Jets’ past seven home openers, which have run the gamut from awful to awesome.

It was a game many thought would never come. It was the game that marked the end of a 15-year NHL drought. It was a game that began the healing process for an entire city. It was a game that, if you were one of the 15,000 fortunate enough to have tickets, made you the envy of hundreds of thousands of ‘Peggers. It was a game that 100,000 people gathered around a giant screen at The Forks to witness. It was the historic and triumphant return of the NHL to Winnipeg. The then-MTS Centre was rocking. The excitement was palpable as the Jets faced the Montreal Canadiens. 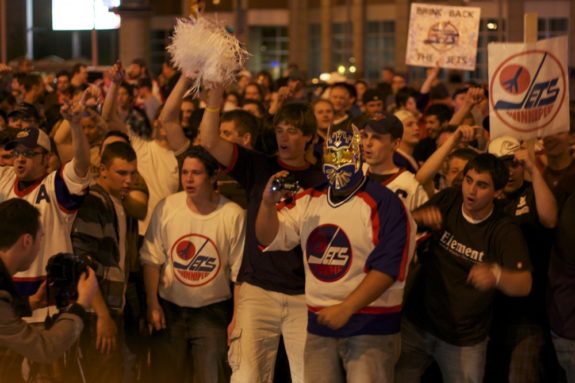 The Winnipeg Jets’ 2011 home opener, their first regular season game ever, marked the end of a 15-year NHL drought in the city. (Greg Gallinger/Flickr)

It was also the game that completely exposed how little talent the newly-located franchise truly had and how much work it was going to take to erase the Atlanta Thrashers’ myriad of mistakes and years of terrible drafting.

Michael Cammalleri scored just over three minutes into the game and the Canadiens took a 2-0 lead into the third period. It was 2:27 into the final frame that Nikolai Antropov scored the first regular season goal in Jets 2.0 history, shovelling in a Mark Stuart point shot past a sprawling Carey Price.

However, 2-1 is as close as the Jets would come — the Canadiens rattled off three consecutive goals after that en route to a decisive 5-1 victory.

The Jets would have to wait 15 months to have another home opener, as the 2012-13 NHL lockout dragged on more than 100 days, forced the cancellation of more than 600 games, and delayed the start of the NHL season until the dead of January.

The Jets welcomed the Ottawa Senators for the first game of their condensed 48-game schedule, but it didn’t go much better than 2011’s matchup against the Canadiens.  Dustin Byfuglien — one of few still left with the Jets by 2018 — actually gave the Jets an early lead exactly six minutes into the first period on the power play. 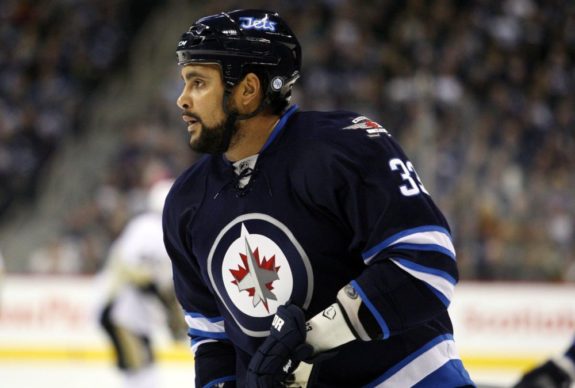 Dustin Byfuglien scored the only Jets goal in their 2012-13 home opener against the Senators. Photo: Bruce Fedyck-USA TODAY Sports

However, that was the only Jets goal of the night. The Senators would score four straight, including an empty netter, and outshot the Jets 37-28 in the process. The star of the game was Erik Karlsson, who tallied a goal and two assists.

The second Jets’ home opener of the 2013 calendar year went a lot better than the first.

The Kings took a first-period lead on a Matt Greene goal, but less than two minutes later, Evander Kane scored to tie the game. Kane’s goal was the first of four straight for the Jets — Olli Jokinen scored to make it 2-1 in the second and Devon Setoguchi notched a pair less than three minutes apart in the third. Setoguchi and Kane both tallied three points on the night. 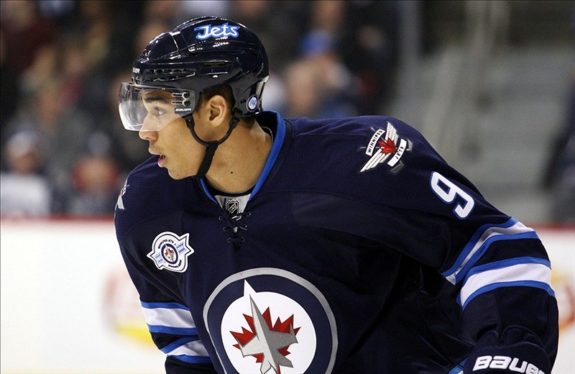 Evander Kane scored a goal, had the primary assist on Devin Setoguchi’s third-period game winner, and also had a fight in the Jets 5-3 win over the Kings. (Bruce Fedyck-US PRESSWIRE)

The Kings would mount a third period comeback and cut the lead to 4-3 with less than five minutes to go, but Bryan Little cemented the Jets’ first home-opener win since relocation with a goal with less than a minute to play to make the final 5-3.

After starting their 2014-15 season off with three straight road games, the Jets finally opened the home portion of their fourth season in Winnipeg on Oct. 17 against the Nashville Predators.

Unfortunately, they would send their fans home without celebrating even once, as Pekka Rinne stole the show with a 31-save shutout and helped the Predators push the Jets record in home-openers to 1-3. 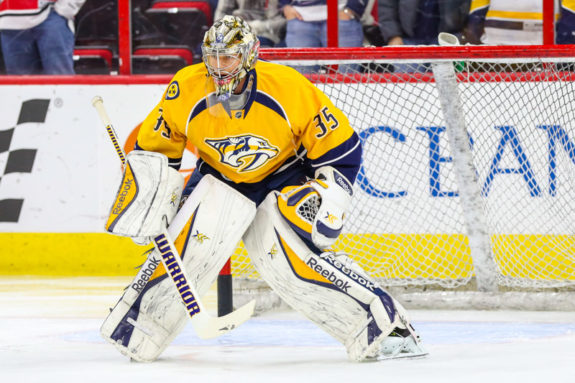 Pekka Rinne made 31 saves and shut out the Jets in their 2014 home opener. (Andy Martin Jr.)

The rough-and-tumble game featured a big third-period scrum that made clear the budding rivalry between the two Central Division foes. A little more than year later, the Jets and Predators played a game that as so chippy the penalty boxes literally couldn’t fit everyone who belonged in them.

While the Jets finished the October portion of the 2013-14 schedule below .500, they finished 43-26-13 and qualified for the Stanley Cup Playoffs for the first time.

Like 2014-15, the Jets began their season on the road. Returning to the MTS centre with a 3-1 record, they continued their early winning ways with a 3-1 win over the Calgary Flames.

Definitely the most dramatic of their five home-openers to that point, the game saw Dustin Byfuglien break a 1-1 deadlock with just 1:28 left in the third period.

After forcing a turnover in the defensive zone, the big Minnesotan rumbled through the neutral zone, pulled a ridiculous deke to get around Dennis Wideman on the side boards, and deposited the puck past Kari Ramo on the short side from a sharp angle before holding his stick up in a “look-at-what-I-just-did fashion.”

Blake Wheeler would add an empty-netter in the final minute. Unfortunately, despite their strong early start, the Jets would falter in badly in November. Ultimately, they won eight less games than the year before and missed the playoffs.

With the Carolina Hurricanes leading 4-1 5:02 into the third period, it appeared as if the game was all but over and the Jets were going to fall to 2-4 in home openers.

However, the Jets stormed back. Blake Wheeler scored to cut the lead to two, and then-rookie Patrik Laine scored his first regular season NHL goal to draw the Jets within one. With just 1:29 left to go, Mathieu Perreault scored on a deflection to tie the game up. 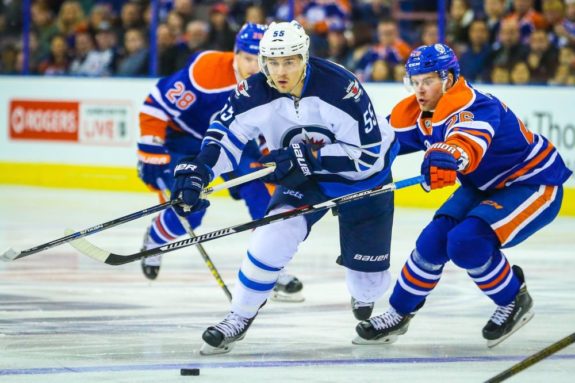 In 2016, Mark Scheifele scored the game winner in overtime to complete a furious comeback against the Hurricanes. (Sergei Belski-USA TODAY Sports)

The Jets completed the comeback in overtime when Mark Scheifele pounded a one-timer top shelf past Cam Ward’s outstretched glove after the budding superstar took a pass from Blake Wheeler on a two-on-one. The 5-4 win evened up the Jets’ home-opener record at 3-3.

The Maple Leafs absolutely pumped the Jets in the most lopsided of the Jets’ seven home openers thus far. They victimized starting goaltender Steve Mason and a discombobulated Jets defence for seven goals, including three in the final five minutes of the first period. No less than six Leafs had multi-point games, with James Van Riemsdyk and Auston Matthews putting up three apiece.

Auston Matthews led the charge for the Maple Leafs in their commanding 7-2 victory in the Jets 2017 home opener. (James Guillory-USA TODAY Sports)

The brutal beatdown, along with an eerily similar 6-3 loss to the Flames a few days later, led to Jets fans prematurely panicking that the plane that was supposed to reach new heights was crash landing instead. However, the Jets stabilized themselves soon after and played their best and most exciting season since relocation, winning a franchise-high 52 games and advancing all the way to the Western Conference Final.

With various media — including The Hockey News and TSN — predicting the Jets will hoist the Stanley Cup this spring, more eyes are on the team than ever before. The pressure will be on them to start their 2018-19 home schedule off right and improve their record in home openers to 4-4.