Plenty has been decided. The Tampa Bay Lightning clinched the Presidents’ Trophy a couple of weeks ago. The Ottawa Senators have last place overall locked up.

We also know that 12 of the 16 playoff positions have been filled. The Pittsburgh Penguins made life difficult for themselves with a 4-1 loss to the Detroit Red Wings on Tuesday. Crosby and Co. sit third in the Metropolitan Division and need a minimum two points in their final two games to be post-season bound.

The two wild-card spots remain up for grabs in the East and the final wild-card place in the West is down to two teams – the Colorado Avalanche and Arizona Coyotes.

The Avalanche has a four-point lead on the Coyotes with two games remaining for each club.

We also know the Boston Bruins will meet the Toronto Maple Leafs in the first-round redux from last spring. The Vegas Golden Knights and San Jose Sharks will clash in the first round, a round earlier than a year ago.

The other six opening-round series will be decided in the days ahead. So with that mind, we offer four storylines worth following over the final four days of the regular season:

Can the Montreal Canadiens make it four Canadian-based teams in the Stanley Cup playoffs? With their win at home against the Lightning on Tuesday, the Habs trail the Penguins by three points, the Carolina Hurricanes by a point, and are tied with the Columbus Blue Jackets at 94 points. The Blue Jackets, however, have the tiebreaker with 44 regulation-time victories compared to Montreal’s 41.

Here are the games remaining for these four teams:

Yes, the Habs have the most difficult schedule out of the four. But remember two things at this time of year: contenders often rest key players and the clubs that are out of contention play loose and free — and that can be dangerous.

For example, bottom-feeders like the Red Wings won their sixth in a row on Tuesday, the Los Angeles Kings knocked off the Arizona Coyotes and the Vancouver Canucks surprised the Sharks.

With the Coyotes defeat at home to the Kings, Colorado is close to clinching the final wild-card spot in the West. Colorado requires a point or any sort of loss by the Coyotes to clinch.

Everything seems to be going Colorado’s way these days. The Avalanche has gone 7-0-2 down the stretch, while the Coyotes have stumbled at a 2-4-3 clip in their last nine outings.

Colorado also likely will welcome Hobey Baker Trophy finalist Cale Makar after the talented right-shot defenceman from Calgary concludes his season with UMass-Amherst at the NCAA Frozen Four next weekend.

While the Maple Leafs know their first-round opponent, the Calgary Flames and Winnipeg Jets still have a number of possible teams they could meet in the post-season next week.

The Flames are locked in the top spot in the West, having already clinched first place. So they will wait to see what happens with Colorado and Arizona.

Meanwhile, the Jets have slumped. They could finish as high as first in the Central Division or as low as third in the division. The list of possible opponents is a nightmare to the team’s pro scouting department. They could meet the Nashville Predators, St. Louis Blues or Dallas Stars. 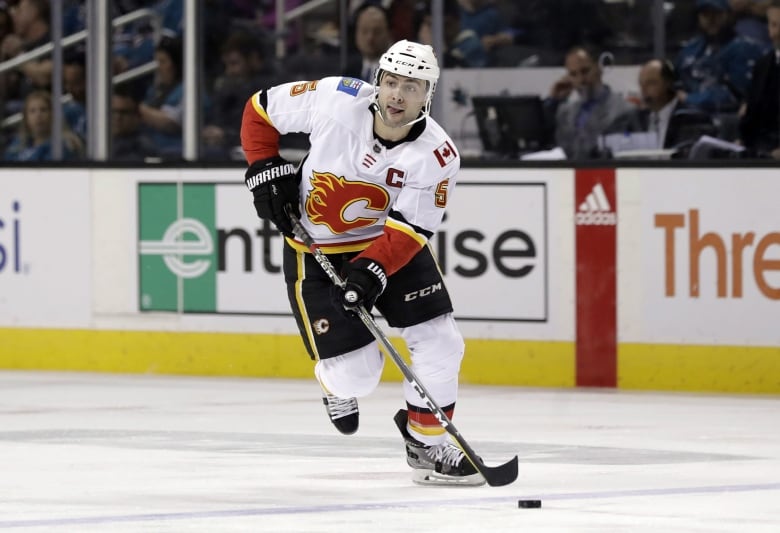 Mark Giordano and the Calgary Flames still don’t know who their first-round opponent will be. (Marcio Jose Sanchez/Associated Press)

Elias Pettersson has enjoyed a wonderful rookie season with the Canucks and seemed a lock for the Calder Trophy. But after a head-turning 23-goal, 45-point performance in his 40 games before the all-star break, the 20-year-old Swede’s production has slowed to four goals and 20 points in his 39 post-all Star game outings.

Pettersson opened the door for Blues’ Jordan Binnington in the Calder Trophy race. The 25-year-old goalie from Richmond Hill, Ont., helped push the Blues from last overall on Jan. 2 to a playoff spot with a 22-5-1 record, including five shutouts, 1.85 goals-against average and .928 save percentage.

Pettersson was the league’s rookie of the month in October and December, while Binnington won the honour for February and March. But will the latter lose votes because he wasn’t promoted until mid-December by the Blues?

Jordan Binnington stopped 29 shots as St. Louis beat Montreal 4-1. The Blues goalie has won two in a row to start his NHL career. 1:35

There have been four Calder Trophy-winning goalies in the past 25 years. All had more wins than Binnington:

The Blues have three games remaining. Two or three wins from Binnington could go a long way to his Calder Trophy chances.