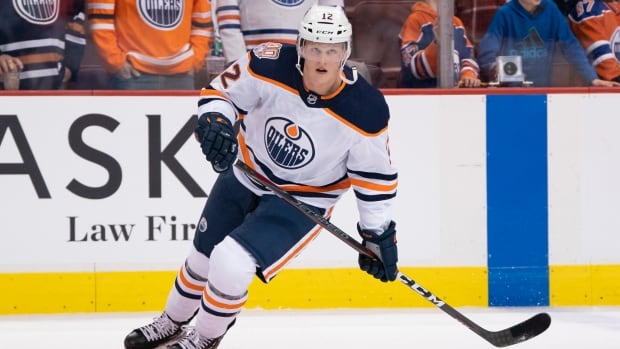 A lineup of vehicles stretching several kilometres along a Saskatchewan highway greeted family members of Colby Cave on Monday as they returned home from Toronto where the Edmonton Oilers forward died of a brain bleed.

Bob Bartkewich, a longtime family friend who plays hockey with Cave’s father, said he and others wanted a way to honour the family given current COVID-19 restrictions prevent them from getting together as a group.

“I was one of the first guys to hold Colby,” Bartkewich said Monday, taking a long pause.

Cave, who hailed from Battleford, Sask., was placed in a medically-induced coma last week. He underwent emergency surgery with doctors removing a colloid cyst that was causing pressure on his brain.

The Oilers confirmed the 25-year-old died on Saturday.

To support the family, Bartkewich says he and other friends came up with the idea to form a line of vehicles along Highway 16 leading into Battleford that the family could see as they returned home.

Bartkewich said the idea snowballed. About 500 signs displaying Cave’s Oilers jersey with his number 12 on it were printed.

Some people held the signs and others stood outside their vehicles wearing hockey jerseys as fire trucks led the family’s
vehicle down the road.

“It just goes to show you the impact that the Cave family and Colby had in town,” Bartkewich said.

Bartkewich said Cave’s father is a third generation farmer with a large cattle ranch. Colby loved the ranch and would help with chores when he was home.

Battleford Mayor Ames Leslie said the family has contributed to the community for generations, and many people followed Colby’s hockey career.

“I was probably the furthest thing from being an Edmonton Oilers fan,” Leslie said. “Since Colby joined the organization, I found myself owning an Oilers jersey and watching more and more Oilers games.”

Bartkewich said Cave was never cocky, despite making it to the NHL, and would always make the time to talk. During father-son hockey games, Cave made sure kids who had just started skating got a chance to touch the puck.

“He always treated everybody with respect,” Bartkewich said. “Just a good old farm kid that showed a lot of respect.”