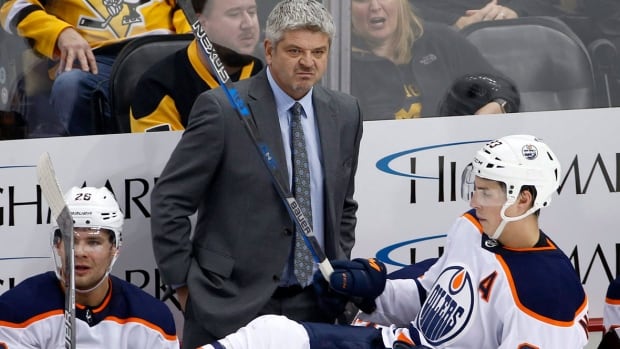 Last season marked the first time since 1966-67 that no NHL team fired its head coach during the season. Five bench bosses ended up getting let go in the spring, while Barry Trotz chose to leave the Stanley Cup champion Washington Capitals for the New York Islanders.

Two general managers were also axed to bring the number of off-season changes to eight. The Canadian Press takes a look at seven men who could be on the hot seat in 2018-19.

Chiarelli, the GM of the Edmonton Oilers, and McLellan, the club’s head coach, will be under fire if things don’t turn around following last season’s disappointment. Edmonton started the year among the Cup favourites, but never got going. Even the heroics of superstar captain Connor McDavid, who led the league in scoring for the second straight campaign, wasn’t enough as an injury-hit, pedestrian defence corps and leaky goaltending spelled doom. Pressed up against the salary cap, Chiarelli wasn’t able to add much to the current roster, so it will be on McLellan to squeeze more out of a group that made it to Game 7 of the second round of the playoffs in 2017.

Montreal’s GM since 2012, Bergevin’s Canadiens are coming off their worst season under his watch. Montreal will need Carey Price to return to form in goal to have any hope of staying in the playoff conversation. The Canadiens also have to tread water on the blue line until defenceman Shea Weber returns from a knee injury. Bergevin got a decent return in the trade that sent captain Max Pacioretty to Vegas as the club started to shift towards a younger core, but a number of Montreal fans remain sore about the P.K. Subban trade for Weber in 2016. And then there was this summer’s deal that sent Alex Galchenyuk to Arizona for Max Domi, a swap that did little to address the Canadiens’ need for talent at centre or help on defence.

The head coach of the Ottawa Senators led the team to within a goal of the Stanley Cup final in 2017 before watching the franchise all but bottom out with a 30th-place finish last spring. The tumble can’t all be pinned on Boucher, however with the trade of captain and star defenceman Erik Karlsson to San Jose and a rebuild in full swing, the coach appears to be the most likely scapegoat for a team with very few expectations. Boucher is entering the final year of his contract, so it’s possible the Senators will simply let him play out the string and begin the search for a new bench boss in April.

It might be hard to fathom seeing a recent three-time Stanley Cup champion on this list, but Quenneville could find himself in the cross hairs. Chicago lost out in the first round of both the 2016 and 2017 playoffs before missing out on the post-season entirely last spring. The Blackhawks are starting to pay the price for their past success with an expensive core that isn’t getting any younger. Quenneville is under contract through 2019-20, but it’s possible he could be shown the door if management thinks a different voice can squeeze out another post-season run.

The Vancouver Canucks general manager is now the man in charge after team president Trevor Linden and the club surprisingly parted ways in late July. Linden had preferred a patient approach to the Canucks’ rebuild, something that clearly didn’t fit with ownership’s view. It’s Benning’s belief that Vancouver can make the playoffs now after missing the last three years. He has accumulated some good talent through the draft, but some of his free-agent signings have raised eyebrows, including the four-year contracts given to veteran grinders Jay Beagle and Antoine Roussel this summer.

Blashill made the playoffs in his first campaign as Detroit head coach in 2015-16 after Mike Babcock left for Toronto, but saw the Red Wings’ run of 25 consecutive post-season appearances end the following spring. Detroit missed the playoffs again last year, but decided to bring Blashill back for a fourth season. With captain Henrik Zetterberg’s career over because of injury, it’s difficult to see how rebuilding Detroit gets back into the playoff picture. That might not bode well for Blashill.