The Ottawa Senators are determined to prove they can survive and thrive without Erik Karlsson.

Looking to move into a rebuilding phase, ownership and management made the decision to trade their captain, and best player, to the San Jose Sharks on Thursday.

While the Karlsson trade didn’t come as a surprise, players acknowledged getting it done before the season probably was best.

“It had the potential to be a distraction,” defenceman Mark Borowiecki said Friday as the Senators hit the ice for training camp. “There was a lot of signs kind of pointing in that direction and now it’s just kind of time for us to move on. A time to look inwards here and what do we have to do now to get this thing righted and it gives us a bit of a chance to focus less on that situation and focus more on ourselves.”

The Senators, who finished second last in the league last year, understand life will be more difficult without Karlsson, but have confidence they have enough solid pieces to move forward.

“Every season is hard, everybody starts from scratch on day one,” said winger Mark Stone. “We’ve got to build every day to generate a foundation that’s going to help us win hockey games and I think there’s a number of guys in this group that are going to help in doing that. I’m excited. We’re back here on day one with everybody and it was a great day and it’s fun to be here.”

The overall message Friday was the remaining veterans are determined to stick together and find the unity that was lacking last season.

Thank you Ottawa for making this my home. All my love to the fans, community and former teammates. You will be dearly missed. On to the next chapter now. Shark nation I’m coming for you. 🦈

“We’re not going to sit around here and drag our lips and mope and feel sorry for ourselves,” said Borowiecki. “Are there going to be tough times? For sure, it’s expected. We’ve got some great ideas, we’ve had some really positive meetings and we had a good, hard session (Friday). The true test is going to be what happens if we go on a five-game slide, seven-game slide. I’m not saying it will happen, but it might and how are we going to react to that as a group. That’s kind of going to be the true test for us.” 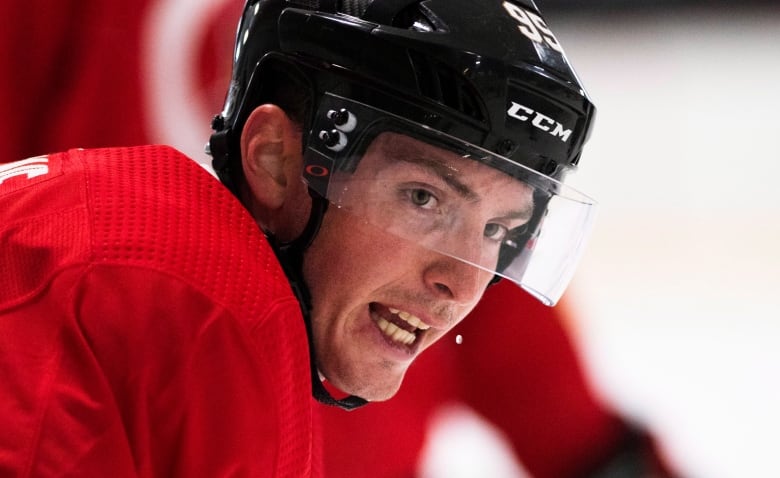 Matt Duchene said Friday the team will try to use the low expectations as motivation. (Sean Kilpatrick/Canadian Press)

Adversity is nothing new for the Senators, who have produced a long line of negative headlines on and off the ice. Matt Duchene pointed out that they’ve been dealing with it for almost a year and joked it seemed to coincide with his arrival last season, when he was acquired in a trade from the Colorado Avalanche.

“Hopefully, it’s not me that’s the problem,” Duchene said with a smile. “Hopefully that’s all gone now and hopefully we can move forward and have a good season. Obviously everybody wants to kind of crap all over us, but we’re going to try and use that as a chip on our shoulder and motivation. We should use it to our advantage.”

The bad news continued Friday when the Senators confirmed centre Jean-Gabriel Pageau suffered a torn Achilles to his right leg during an agility test Thursday and is expected to miss six months.

In a depth chart released Wednesday, the Senators had pencilled in Pageau as their second-line centre. The 25-year-old had 14 goals and 39 points in 78 games last season.

“That one was a kick for us,” said Duchene of losing Pageau. “He’s such a special player for us too. He’s a guy that plays such a big role and does things that a lot of guys can’t do out there in terms of the grit and the role he plays. That’s going to be really tough to replace.”

The injury will create opportunity as Zack Smith, expected to be on the third line, could move up or Chris Tierney, acquired from the San Jose Sharks as part of the Karlsson trade, could get a chance. Tierney had 17 goals and 40 points in 82 games last year.

With the Senators going with a youth movement, they will likely give Colin White, Logan Brown and Filip Chlapik an opportunity as well.