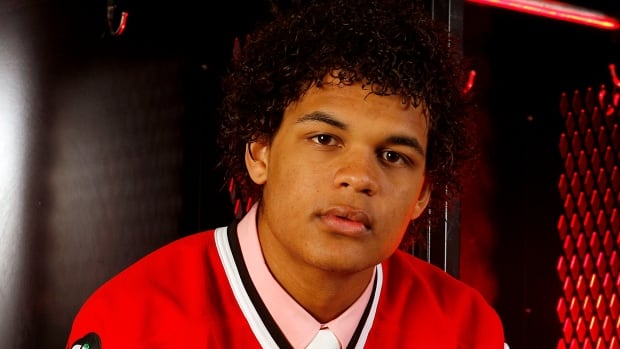 Akim Aliu revealed another tale of racism from his time in professional hockey on Wednesday.

Aliu, who recently came forward with allegations of a racist incident involving former Calgary Flames coach Bill Peters, told the Wall Street Journal that as a member of the ECHL’s Colorado Eagles in 2011, an equipment manager wore blackface to a Halloween party Aliu attended.

The Nigerian-born Aliu says he was told a few days before the party to “come a little bit later,” but didn’t think much of it. When he arrived, he noticed the equipment manager, Tony Deynzer, sporting an afro-style wig, blackface and a team jersey with Aliu’s number and his nickname ‘DREAMER’ on the back.

Aliu and Deynzer took a picture together, in which the latter is smiling and the former is not.

“Guys just started laughing,” Aliu said. “All I can do is tell my story.”

The Colorado Eagles issued a statement apologizing to Aliu on Wednesday.

“As an organization, the discovery of this event deeply saddens us. Although we had no prior knowledge, that doesn’t excuse or diminish the fact that this hurt a fellow human being.

“We are truly very sorry, and we will also assure you that this behaviour is not and never will be acceptable in our organization.”

Deynzer, who remains an Eagles employee, was placed on an administrative leave of absence by NHL parent club Colorado Avalanche, according to multiple reports.

Peters, in the wake of Aliu’s accusation of his use of racist slurs while the two were together with the AHL’s Rockford IceHogs, resigned as Flames head coach on Nov. 29.

Aliu later met with NHL commissioner Gary Bettman and other league officials to discuss racial issues, as well as instances of coaching misconduct that have emerged since Aliu’s initial tweet.

At the NHL board of governor’s meeting in California on Monday, Bettman announced a four-point plan to help combat physical and verbal abuse throughout hockey.