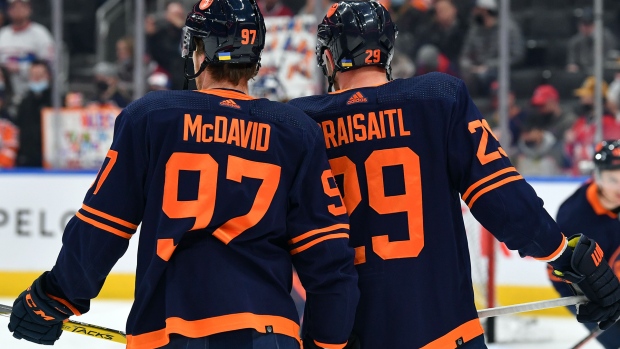 The Edmonton Oilers and Calgary Flames have demonstrated support for Ukraine and its struggle to repel Russia’s invasion, but how far will Alberta’s NHL clubs and their fans go when league star Alex Ovechkin is in their buildings?

The Washington Capitals are in Calgary on Tuesday and Edmonton on Wednesday.

Ovechkin has historically been a vocal supporter of Russian President Vladimir Putin, and the Capitals’ captain’s Instagram account features a photo of himself standing beside Putin.

When asked about his relationship with Putin, Ovechkin said “he’s my president, but I’m not in politics. I’m an athlete.”

There are nearly 370,000 Albertans of Ukrainian origin, according to a 2016 Statistics Canada census, which is the second-largest among Canada’s provinces and territories.

The Edmonton Oilers’ support of Ukraine was emphatic Saturday when Oilers’ helmets bore stickers of Ukraine’s flag and a men’s choir sang both the Ukrainian anthem and O Canada before a game against Montreal at Rogers Place.

A Ukrainian folk ensemble will perform at Rogers during Wednesday’s game against the Capitals “to share Ukrainian culture with Oilers fans and help sing the national anthems,” the Oilers said.

“The Edmonton Oilers stand in solidarity alongside the people of Ukraine,” Oilers Entertainment Group vice-president Tim Shipton said Monday in a statement.

“Alberta is home to more than 345,000 people of Ukrainian heritage, and their culture and traditions are a significant part of the fabric of our community here in Oil Country.

“As we saw during Saturday’s home game, Oilers fans were very respectful in showing their support for Ukraine.”

“For the enjoyment of all guests, signs must roll up under a seat and be displayed only during warm-up or breaks in play,” the policy states.

What people wear isn’t restricted either. Fans are allowed to wear costumes, including masks while in their seats, as long as they’re not distracting other fans.

Alberta’s provincial government on Friday donated $5 million to the World Ukrainian Congress for non-lethal civilian defensive equipment such as helmets and bulletproof vests, and another $5 million to the Canada-Ukraine Foundation for humanitarian aid.

Nearly 160,000 people in Edmonton are of Ukrainian descent while just over 90,000 reside in Calgary, according to the 2016 census.

Ukrainian-Canadian opera singer Stephania Romaniuk was scheduled to sing the Ukrainian anthem at Calgary’s Saddledome before Monday night’s puck drop between the Oilers and Flames.

Prior to puck drop, we pledged our support to the people of Ukraine 🇺🇦 <a href=”https://t.co/mjIVSfUCv6″>pic.twitter.com/mjIVSfUCv6</a>

No pro-Ukrainian elements are planned for the Flames’ home game against the Capitals on Tuesday, however.

As for fans wearing Ukrainian jerseys or waving that country’s flag at the Saddledome, a Flames spokesman referred to the arena spectator policy on what is allowed into the building for games.

While signs can’t be “distasteful in nature or content” and flags can’t impede views of the ice, there are no specific rules against wearing jerseys or displaying flags.

Money from Edmonton’s progressive 50-50 draw Monday to Wednesday will go to the Canada-Ukraine Foundation.