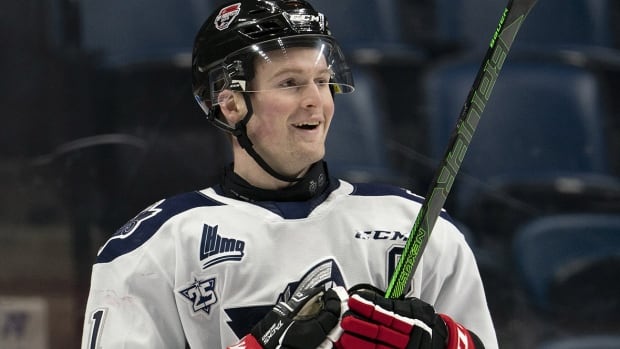 Alexis Lafreniere of Saint-Eustache, Que., remained the top North American skater as the NHL released its final rankings for the 2020 draft Wednesday.

Lafreniere, a left-winger with the Rimouski Oceanic, was leading the Quebec Major Junior Hockey League with 112 points on 35 goals and 77 assists in 34 games when the league cancelled the remainder of its 2019-20 season on March 17 due to the COVID-19 pandemic.

The 18-year-old was a standout at the 2020 world junior championship in the Czech Republic, where he was named MVP and best forward after amassing four goals and 10 points in five games for Canada, which captured a gold medal.

Forward Quinton Byfield of the Ontario Hockey League’s Sudbury Wolves finished with the No. 2 rank, followed by defenceman Jamie Drysdale of the OHL’s Erie Otters. Both were Lafreniere’s teammates at the world juniors. Defenceman Jake Sanderson (US under-18 team) and centre Cole Perfetti (Saginaw Spirit, OHL) rounded out the top five.

Tim Stuetzle, a left-winger for Mannheim in Germany’s top professional league, is the top international skater.

The 2020 draft was originally scheduled to be held June 26-27 at the Bell Centre in Montreal but has been postponed due to the ongoing uncertainty resulting from the novel coronavirus. The location, timing and format of the draft will be announced when details are finalized.

If selected first overall, Lafreniere would become the first Quebec-born player taken No. 1 since Vegas goaltender Marc-Andre Fleury in 2003 and first Canadian-born player to be taken with the first overall pick since Edmonton captain Connor McDavid in 2015.