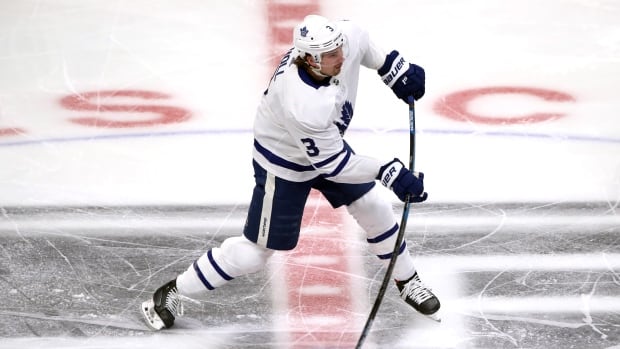 Holl has spent most of the COVID-19 pandemic that shut down the NHL, and much of North America, at home in Minnesota since the season was paused March 12.

The 28-year-old said Tuesday he’s encouraged by news that some other sports are beginning to make plans to resume activities, and that the league could open team facilities to small groups of players later this month.

But as an American-born NHLer, Holl knows he could face an extra hurdle getting back to Toronto.

Prime Minister Justin Trudeau said over the weekend that non-residents would “at a strict minimum” need to follow quarantine protocols if they arrive in Canada while the border remains closed due to the novel coronavirus outbreak.

For the Leafs, that would mean the likes of Holl, along with star centre Auston Matthews and No. 1 goalie Frederik Andersen, who both are in Arizona, isolating for two weeks before being allowed to start activities with teammates.

Holl has “tentative plans” if the NHL gets the go-ahead from government and health officials, but he’s not going to make any premature moves.

“The general consensus amongst American players [on Canadian teams] is that we’ll wait until we have a concrete plan before we go back,” Holl said on a conference call with reporters. “Because you never know if you go back there and then you’re sitting around for another month or two.

“Once we have a plan, being in Minnesota, I’ll hop in the car that day basically and just drive back and then start that process, and hopefully I’ll be good to go.”

A number of European players on Canadian clubs returned to their home countries in the weeks after the NHL suspended its schedule. Plenty of Americans did the same, including Matthew Tkachuk of the Calgary Flames, and younger brother Brady, who plays for the Ottawa Senators.

Alberta Premier Jason Kenney said last month he’d had a conversation with NHL commissioner Gary Bettman about Edmonton being a so-called “hockey pod” that could host games without fans during the summer months, while Ontario counterpart Doug Ford said Tuesday that Maple Leaf Sports & Entertainment had contacted the province about Toronto serving in a similar capacity.

“They’re coming up with a game plan, [the] NHL as a whole,” Ford said. “They haven’t really divulged anything else as of yet, but we have had a conversation.”

The most aggressive scenario would have players returning to their home rinks as early as May 15, followed by a training camp and possible exhibition games in June. Under that timeline, the regular season would resume in July, with the Stanley Cup final likely stretching into September.

The league and NHL Players’ Association have formed a joint Return to Play Committee — which includes Leafs captain John Tavares — to determine a path forward.

Holl, who became a full-time NHLer in 2019-20 in his sixth professional season, said he’s been keeping a close eye on proceedings.

“I’ve been paying close attention to the [NHLPA] calls and I’ve been in touch with some of the guys on the Return to Play Committee,” he said. “Just trying to get a better idea of where we’re headed, but it seems like other sports are starting to open up and set dates for return, so I hope that means that we won’t be far behind.

“I’m optimistic. I’m ready to go at a moment’s notice.”