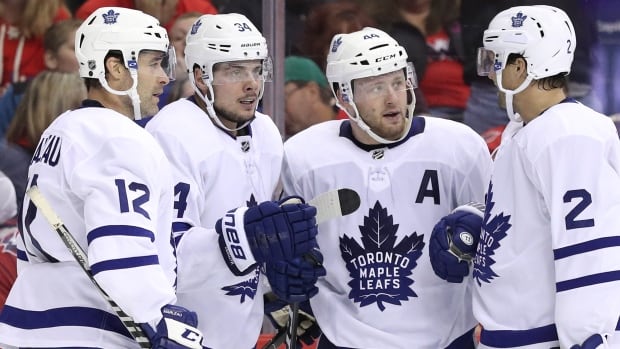 Auston Matthews scored a goal in his sixth consecutive game to start the season, Frederick Andersen made 25 saves and the Toronto Maple Leafs beat the Washington Capitals 4-2 on Saturday night.

Moments after Andersen made several solid saves to preserve the lead, Matthews provided an insurance marker with his NHL-leading 10th goal with 1:39 to play.

Josh Leivo scored the go-ahead goal early in the third period, Kasperi Kapanen had a goal and an assist and Par Lindholm also scored for Toronto, which has won four straight. Jake Gardiner had two assists.

Auston Matthews is the 15th player in NHL history to score at least 10 goals in his team’s first six games of the season – and just the 5th to do so in the modern era (since 1943-44). <a href=”https://twitter.com/hashtag/NHLStats?src=hash&amp;ref_src=twsrc%5Etfw”>#NHLStats</a> <a href=”https://t.co/FvtOdWvBpO”>pic.twitter.com/FvtOdWvBpO</a>

Evgeny Kuznetsov scored his fourth goal of the season for Washington and added an assist. Chandler Stephenson also scored and Alex Ovechkin had two assists.

Braden Holtby made 24 saves for Washington.

The Maple Leafs went undefeated on their four-game road trip.

It took Washington just 18 seconds to take a 1-0 lead. Evgeny Kuznetsov carried in 2-on-1 with Stephenson and Andersen made the initial save on Kuznetsov, but Stephenson poked home the rebound for his first goal of the season.

Toronto had several chances to tie in the first. Holtby made big saves on Zach Hyman and Kasperi Kapanen, both alone in front, and the Maple Leafs hit the post twice.

The Maple Leafs tied it at 3:30 of the second period when Kapanen deflected Ron Hainsey’s shot from the left point through a crowd and past Holtby.

Just 69 seconds later, Kuznetsov fired a tough-angle shot over Andersen’s shoulder from the bottom of the right circle for a power-play goal.

Lindholm tied it when he redirected Jake Gardiner’s pass by Holtby with 67 seconds left in the period for his first career goal.