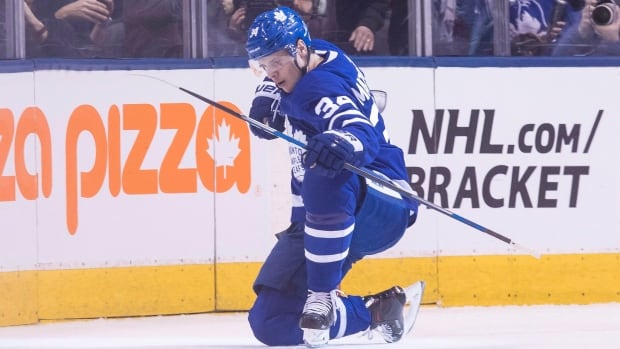 ​The Toronto Maple Leafs put up a franchise-best 49 wins last season, eventually losing in the first round of the playoffs for the second consecutive year, but with a second star lining up at centre next season, they’re hoping to shed the title of “talented up-and-comers” in favour of Stanley Cup contenders.

Auston Matthews says the addition of John Tavares, who signed a seven-year contract worth US$77 million with his hometown club on July 1, gives the Leaf one of the “premier players in the NHL” and should give the team a massive boost.

“It’s obviously exciting for us as players, as teammates, and you get a guy like that — it definitely takes us to the next level,” said the 20-year-old at a reception Thursday ahead of teammate Mitch Marner’s charity All-Star Invitational.

Matthews can expect his own big payday soon. ​Sportsnet’s Luke Fox reported Thursday that the Leafs and the 20-year-old centre are in talks about a contract extension that will likely pay him upward of $80 million US over eight years.

Matthews — who put up 34 goals and 63 points in a injury-shortened 2017-18 campaign — said he reached out to Tavares, who was born in the suburb of Mississauga, Ont., and grew up in nearby Oakville, Ont., in effort to help recruit him to Leafs. But he didn’t want to overwhelm him as he wrestled with the decision of leaving the New York Islanders, who drafted him first overall in 2009.

“I just wanted to talk to him on the phone briefly and, obviously, let him know we’d love to have him and that he’d be a great fit on the team,” he said, noting that they’d met previously at the 2016-17 all-star game.

“And obviously we’re extremely happy he decided to sign in Toronto.”

With Matthews and Tavares anchoring the 1A and 1B lines, the Leafs have two centres that scored at more than a point-per-game pace last season. They also have two-way centre Nazem Kadri, who is coming off a second consecutive season with 50-plus points.

Auston Matthews talks about how he helped recruit John Tavares <a href=”https://t.co/ttdNwb9Rba”>pic.twitter.com/ttdNwb9Rba</a>

That kind of firepower up the middle has been key to the past few Stanley Cup winners as the defending champion Washington Capitals boast Evgeny Kuznetsov and Nicklas Backstrom, while the Pittsburgh Penguins, who won back-to-back titles in 2016 and 2017, have Sidney Crosby and Evgeni Malkin.

Marner, who coach Mike Babock has said is likely to slot in next to Tavares, echoed Matthews’ sentiments.

“It’s massive. Our centreman depth is incredible. We’re going to be a very hard team to beat in the circle and that’s obviously exciting,” said the 21-year-old, who is coming off a 69-point season.

Auston Matthews says his new look “will give you guys something to talk about”. Adds “you should see William Nylander.” <a href=”https://t.co/vMZuP8nkfp”>pic.twitter.com/vMZuP8nkfp</a>

“Puck possession is massive in the NHL and starting off the draws is a big part of that.”

The play-making winger said should he end up riding shot gun next to the five-time all-star Tavares he doesn’t believe he will have to change his game, but he likely will have to be prepared to fire at will.

“He can pass and shoot, so I think it’ll work for both of us, but I think from my standpoint, just be ready to shoot more. I know he can make very good plays as well and makes people around him open. I think we’ll mesh well and I’m excited for it.”

Marner said he the Leafs are still feeling the sting of last spring’s first-round exit in seven games at the hands of the Boston Bruins. But he believes the club is ready to be a threat in the post-season.

“I think we have a lot to prove. This year obviously, we were happy going into the playoffs, but back-to-back first-round exits, it’s not something we obviously want to keep doing,” he said.

“This is the year I think we have to step up to another level and challenge each other. Like I said, we’re excited … to get started and get back to work.”