Dozens of U.S.-born NHL players paid tribute to Jim Johannson and raised funds for two of his favorite causes, his 2-year-old daughter and grassroots hockey.

Auston Matthews and Patrick Kane were among the American stars and standouts who gathered for a charity game won by the Blue over the White 14-9 Sunday.

“He was very good to me and my family,” said Matthews, who played for USA Hockey’s National Team Development Program before Toronto drafted him No. 1 overall in 2016. “He gave me an opportunity to play for USA Hockey.”

Detroit Red Wings center Dylan Larkin led the push to get many players in the league to travel, at their expense, to play an exhibition game in for 3,000-plus fans at USA Hockey Arena.

“Guys went about and beyond,” Larkin said. “All I had to do was send a couple texts.”

The event honored Johannson, who died at age 53 in January. He was a longtime USA Hockey executive and was serving as the U.S. men’s Olympic hockey team general manager when he died. 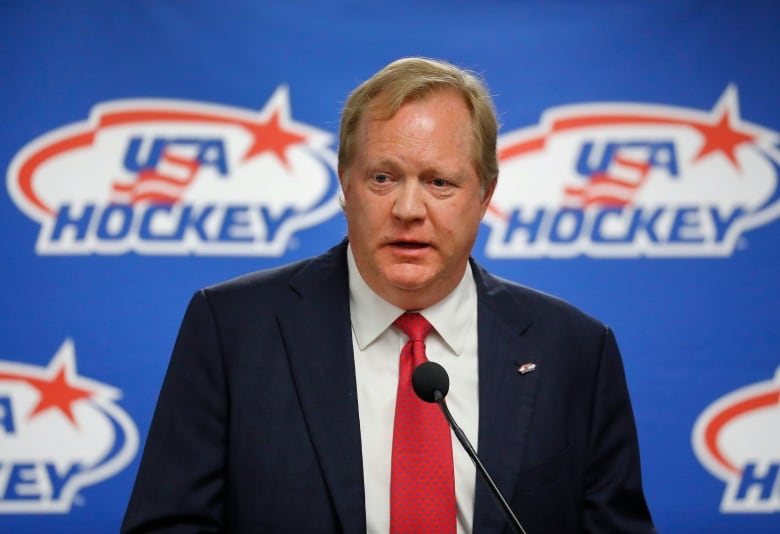 Longtime USA Hockey executive Jim Johannson died at age 53 in his sleep in January. On Sunday NHL stars Auston Matthews and Patrick Kane were among dozens of U.S.-born players who gathered for a charity game in his honour. (Paul Sancya/Associated Press)

“It’s a great tribute to a great person we miss every day,” said Pat Kelleher, executive director of USA Hockey

Johannson’s wife, Abby Tompkins, and their 2-year-old daughter, Ellie, participated in a ceremonial puck drop along with Johannson’s father, brother and sister.

“It made me want to cry,” Minnesota Wild forward Zach Parise said. “It still doesn’t seem real. I was so sad to this his wife and daughter.”

Tompkins said the support has been incredible, adding it speaks to the kind of man her husband was in the hockey community.

Johannson, who helped Wisconsin win a national championship, played for the U.S. at the 1988 and 1992 Olympics and began working for USA Hockey in 2000 after spending five years as the general manager of the Twin Cities Vulcans in the United States Hockey League. He was promoted to assistant executive director of hockey operations in 2007, overseeing the organization’s efforts in fielding teams for international competition.

“He’s the guy that calls and says, `Hey Zach, you made the Olympic team,”‘ Parise said. “He was kind of the glue for everything.”