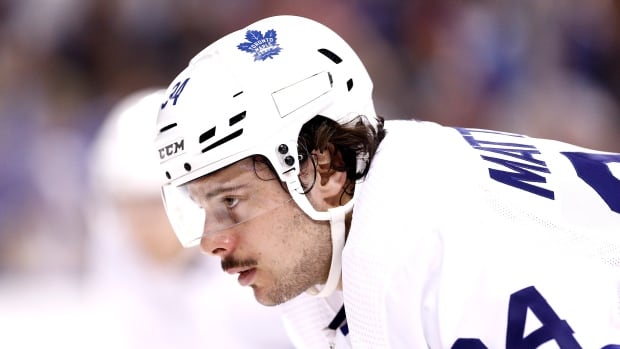 Toronto’s leading scorer is receiving treatment for an ongoing wrist injury, but will still be in St. Louis for all-star weekend. Because Matthews isn’t skipping the event entirely, he also avoids a one-game suspension from the NHL.

<a href=”https://twitter.com/hashtag/Leafs?src=hash&amp;ref_src=twsrc%5Etfw”>#Leafs</a> forward Auston Matthews will attend the upcoming NHL All-Star Weekend but will not be actively participating in any on-ice events. Matthews is listed as day-to-day as he receives acute treatment for an ongoing wrist condition.

The NHL said the 22-year-old will be replaced by Senators forward Brady Tkachuk, whose brother Matthew will represent the Pacific division. Both brothers are first-time all-stars.

Brady Tkachuk has 15 goals and 12 assists in 48 games during his sophomore season with Ottawa.

Both Brady and Matthew grew up in St. Louis, Mo. The Tkachuk family settled there while their father, Keith, played for the Blues for nine seasons from 2000-2010.

Matthews’ 34 goals have him tied with Alex Ovechkin for second league-wide.

Forward Mitch Marner and goalie Frederik Andersen will represent Toronto on the ice in St. Louis, while Tkachuk joins Ottawa teammate and fellow forward Anthony Duclair on the Atlantic roster.