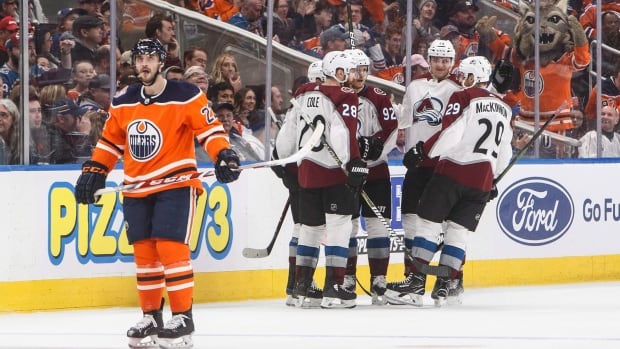 Mikko Rantanen, Carl Soderberg and Tyson Barrie each had a goal and an assist as the Colorado Avalanche were in full control during a 4-1 victory over the Edmonton Oilers on Sunday.

Alexander Kerfoot also scored for the Avalanche (8-6-3), who snapped a five-game losing skid.

Semyon Varlamov made 26 saves for the win.

Ty Rattie responded for the Oilers (8-8-1), who have lost four games in a row.

Cam Talbot stopped 12-of-15 shots in 25:06 of work before being replaced in Edmonton’s net by Mikko Koskinen, who turned aside 12-of-13 shots.

It didn’t take long for Colorado’s top line to be heard from, scoring just 26 seconds into the game when Rantanen fluttered the rebound of a Nathan MacKinnon shot past Talbot for his sixth goal of the season and 25th point.

Soderberg scored on a long point shot through traffic to give Colorado a 2-0 lead with 4:27 remaining in the opening period.

The Avs added to their lead with a power-play goal five minutes into the second period when Kerfoot was allowed three whacks at the puck from the side of the net before scoring. That brought Koskinen in to replace Talbot, who allowed three goals on 15 shots.

Colorado kept coming with another goal midway through the second period, as Rantanen fed it in front for Barrie, who scored his first goal of the season. Rantanen regained the lead in the NHL scoring race on the play.

The Oilers remain at home to face the Montreal Canadiens on Tuesday, while the Avalanche return to Denver to take on the Boston Bruins on Wednesday.