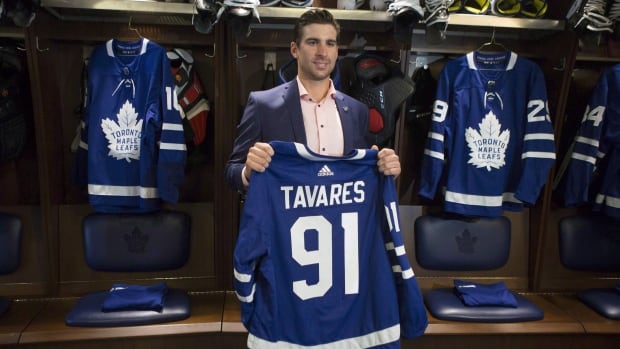 The Toronto Maple Leafs have heard the noise and appreciate the kind words.

“You take it as a compliment, but you take it with a grain of salt as well,” Leafs defenceman Morgan Rielly said Thursday as Toronto opened training camp with testing and medicals. “We feel like we’ve got a long way to go to where we want to be.”

The Leafs got a lot closer on July 1 after stunning the hockey world by convincing free-agent centre John Tavares — set to turn 28 years old and in the prime of his career — to leave the New York Islanders and join the team he cheered for growing up in the suburbs west of Toronto.

“We added a big piece in John,” Rielly added. “I’m sure that has a lot to do with the predictions.”

Those predictions from the outside also have to do with a healthy Auston Matthews being a year older, Mitch Marner continuing his red-hot second half of 2017-18, the defence corps improving minus outside additions, and goalie Frederik Andersen building on a franchise-record 38 wins.

Oh, and restricted free agent William Nylander coming to terms with Toronto on a new contract.

For his part, Tavares, who signed a massive seven-year, $77-million US contract to come home, understands the pressure that awaits.

“I obviously realized what and who the Toronto Maple Leafs are, how passionate the city is about the game of hockey, which is something special,” he said. “But a lot of that noise is stuff that I can’t really control or worry about. I just go by how I can make the biggest impact I can on a daily basis.”

Toronto, which bottomed out in 2015-16 in the throws of a full rebuild that netted them Matthews with the first pick in the draft, made the playoffs the last two seasons after missing out 10 of the previous 11 campaigns. But both ended with first-round exits — in six games to Washington in 2016 and in seven games to Boston in 2017.

The Leafs, who a number of NHL stars picked as legitimate contenders at the league’s recent media tour and have among the shortest Cup odds at Las Vegas sports books, will once again be without a captain to start the season, choosing instead to go with Tavares, Rielly and Patrick Marleau as assistants.

“You’ve got guys who’ve been around,” said Babcock, whose team begins on-ice sessions Friday in Niagara Falls, Ont. “They’ve got some battle scars on ’em, and they know that’s just noise.”

Matthews, who finished second on the team with 63 points last season behind Marner’s 69 points despite missing 20 games with various injuries, Tavares and Nazem Kadri make up Toronto’s lethal three-headed monster down the middle that should keep opposing coaches up at night.

“It definitely makes it tough,” said Matthews, who turns 21 on Monday. “All of us had 30 or more goals last year.

“It’s pretty hard to find, three centres of our calibre to match up against.”

Babcock said immediately after Toronto signed Tavares that he envisioned starting camp with him between Marner and Zach Hyman, and Matthews centring Nylander and Marleau.

The only problem with that is Nylander remains away from the team as his representatives negotiate with the Leafs on a new deal.

“We’re continuing to have dialogue,” Dubas said. “This is not an uncommon situation.”

Apart from getting Nylander in the fold, the Leafs have questions on the blue line, which while solid with Rielly, Hainsey, Jake Gardiner and Nikita Zaitsev, has two holes to fill and lacks a true No. 1.

Toronto set a franchise record with 49 victories and 105 points last year, although those numbers are a little misleading when taking into account that three of Pat Quinn’s teams in the early 2000s cracked 100 points — before the league introduced the shootout to settle ties.

The question is, however, can this version of the Leafs go even higher, especially when it matters most in the playoffs?

“Where we’re going to be at the end of the year, I don’t know,” Rielly said. “But I believe in us as a group.”