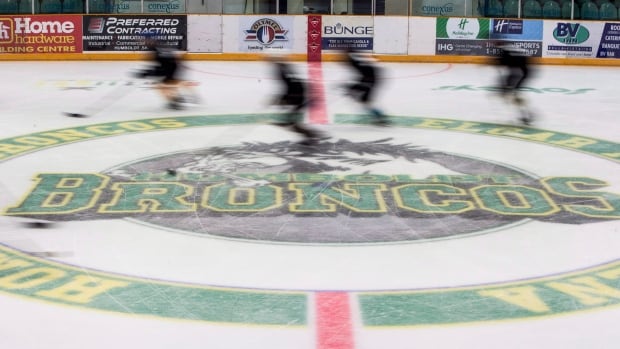 Ross Gilchrist was taken aback by how much a bus crash involving the Humboldt Broncos affected him personally.

Gilchrist played for the junior hockey franchise from 1971 to 1973. The crash, which left 16 dead and many others dealing with lifelong injuries, prompted him to call a couple of former teammates and get an alumni association started.

He was able to purchase nearly 30 tickets for when the Broncos get back on the ice Wednesday night for their first regular season game since the tragedy and he offered them to the 220 people he managed to get on the team’s alumni mailing list.

“We just got inundated,” Gilchrist recalls from his home in Victoria, B.C.

Emails started to flood in from people all over the world, including England and Sweden, who wanted to come and show their support.

Team president Jamie Brockman says he is not really sure what to expect when the Broncos face the Nipawin Hawks Wednesday night.

The Hawks are the same team the Broncos were on their way to play April 6 when their bus collided with a tractor-trailer at a rural intersection.

Brockman, who took over the president’s role last month, says the home opener, which will be broadcast live on TSN, is another step toward getting back to normal.

“I know we’re going to have a hockey team that is going to want to play for that logo on the chest,” Brockman says. “And a lot of people that want to see that be successful.”

But, he says, last year’s team won’t be far from their minds.

“Time does help some, but we’ll never forget,” he says. “We’re experiencing a new normal and we’ll never want to forget the players and families that have been involved in that moving forward.”

Memorials already line the halls and ice at the Bronco’s Elgar Petersen Arena.

Just inside the main doors, there’s a big cross with the names of those who died in the crash along with a flag of what province they were from.

A giant hockey stick with the hashtags #BroncosStrong and #PrayersforHumboldt stands beside it.

Further down, there’s a glass display with banners displaying the numbers and last names of everyone on last year’s team and a team picture.

Inside the rink, a pair of ribbons with the Broncos colours are painted into each end of the ice.

Pastor Sean Brandow has been in Humboldt for eight years and has worked with the Broncos as their chaplain. He recalls late coach Darcy Haugan’s slogan: “It’s a great day to be a Bronco, gentlemen.”

“I hope that’s true again this year too,” Brandow says.

“We want the town to heal.”

Leo Wurtz, the founding president of the Broncos, is proud the team will carry on.

The 79-year-old, who lives in Lloydminster, Sask. now, says the new season will help take people’s minds off the tragedy.

“I think it’s knowledge in the hockey world that the Humboldt Broncos were, if not they are, the top junior A franchise in Canada,” Wurtz said. “They’ll follow in the footsteps of the great teams that were before them.”

Ralph Britz, who was an assistant coach on the team in the early 1980s and a former season-ticket holder, says the community is behind the team.

“Humboldt sort of [thrives] on the Broncos in the winter months,” Britz says. “It’s a big income for the Humboldt area, because there’s lots of people around here that just live for hockey.”

There is a reunion for the 1972-73 Broncos team the day before the home opener.

Gilchrist, who was on that team, says it’s bittersweet to have the Broncos back for another season.

He recalls a conversation he had with Haugan’s replacement, coach Nathan Oystrick.

“I said: ‘This is a win that you’re actually even icing a team this year,”‘ Gilchrist said. “I think that’s a huge win.