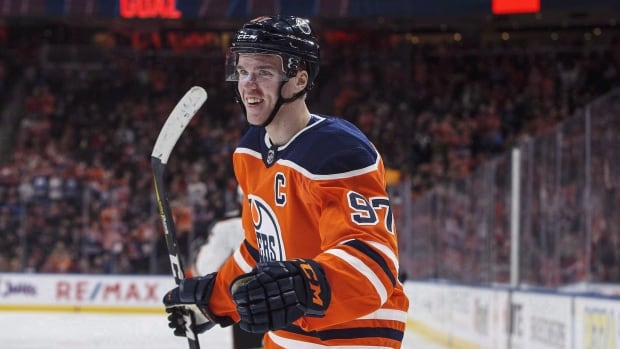 Connor McDavid did everything in his power to drag the Edmonton Oilers into last season’s playoff race.

He led the NHL in scoring for the second straight year, recorded an outrageous 84 points at even strength despite a turnstile of wingers, and was once again voted the league’s most outstanding player by his peers.

But his 41 goals, 11 more than what he put up in 2016-17, and usual dominant performances weren’t nearly enough as the Oilers fell flat despite some gaudy pre-season predictions, finishing 17 points below the cut line.

So what was the superstar captain’s focus this summer? Fill the net even more, of course.

“There’s always ways to improve your game and ways to be more dangerous and dynamic,” said McDavid, who had 108 points last season. “I’ve always said I want to score more.”

That can’t hurt, but the Oilers will need more than McDavid’s offensive magic to get back in the playoffs this spring.

A popular Stanley Cup pick last October, they were disastrous defensively, leaked goals at an alarming rate, and were pretty much out of it by December.

Despite returning with basically the same group, McDavid, who on top of filling the net at an increased rate also hopes to improve his own two-way game, is confident the Oilers can rebound.

“It’s a good thing to keep everyone together,” he said Monday at the BioSteel Camp in Toronto. “We didn’t want to go in and blow it up. [General manager Peter Chiarelli] has always said if there’s a move to be made he was going to make it, and if there wasn’t then we keep it all together.

“We’re confident that everyone’s going to come back and get back to where we were about two years ago where everyone was just buzzing.”

The young Oilers made the playoffs in the spring of 2017 to end an 10-year drought, falling to the Anaheim Ducks in seven games in the Western Conference semifinal.

Buoyed by that massive step forward, it was thought Edmonton would continue to rise into the NHL’s upper echelon.

Instead, the Oilers remained in neutral for much of what would turn into a head-scratching campaign. Injuries on the blue line took a toll, while goalie Cam Talbot’s save percentage of .908 dipped well below his previous career mark.

‘Kick in the head’

“It was kind of a kick in the head going through last season,” said defenceman Darnell Nurse, who is also taking part in this week’s BioSteel event that sees a group of NHLers go through drills and scrimmages in final preparation for the start of training camp next month. “It leaves a very bad taste in your mouth all summer.”

“One of the things you learn is you can’t believe your own hype,” Nurse continued. “We didn’t have that hunger that we had the year before that made us so successful … it’ll be good to have that back.”

The winner of the Hart Trophy in 2017 and now a two-time recipient of the Ted Lindsay Award, which is voted on by the players, McDavid also said he hopes his teammates took last season’s failure to heart into their summer training.

“The only thing that really changes is just that bitter taste in everyone’s mouth [with] where we finished and where we left off last year,” said the 21-year-old. “Everyone should be highly motivated.”

McDavid’s eye-popping 84 points at even strength last season — the most in the NHL since Jaromir Jagr put up 95 in 1995-96 — came despite playing alongside a grocery list of wingers before he found some chemistry late in the schedule between Ryan Nugent-Hopkins and Ty Rattie.

“We juggled the lines a lot last year,” McDavid said. “That’s just how it played out. Obviously it would be nice to be able to play with a consistent line and a group, but if that’s not how it works out again then so be it.”

Nurse, a restricted free agent who remains unsigned with camp just 2 1/2 weeks away, said being in the presence of McDavid and his drive on a daily basis is something the rest of the Oilers need to use to their advantage.

“As much as his personal success was great, I know there’s no part of him that was really satisfied with the way that the team went,” the 23-year-old blue liner said. “The type of hunger that he shows and his willingness to do whatever it takes to win, we all have to feed off that.

“It’s crazy we have a season like we did and he’s able to produce the way he did, but it’s going to be important for everyone to pick up some slack.”