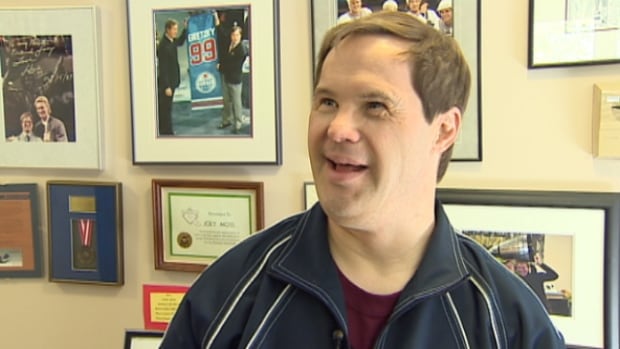 Edmonton sports legend Joey Moss has died at the age of 57.

Moss, who was born with Down syndrome, worked as a locker room attendant with the Edmonton Oilers and Edmonton Football Team for decades. He was inducted into the Alberta Sports Hall of Fame in 2015.

Moss was introduced to the Oilers in the 1984-85 season by Wayne Gretzky and became a fixture with the team ever since. Gretzky said the two had a friendship that spanned decades.

“Janet and I are profoundly saddened to learn about the passing of Joey Moss,” reads a statement posted to the Wayne Gretzky Estates Winery & Distillery Facebook page.

“Not only was Joey a fixture in the Edmonton dressing room, he was someone I truly considered a friend — a friendship that spanned over 35 years.

“Joey was not only the spirit of our team, but of our community too. We will miss you Joey and you will always live on through all the memories you have given so many people. Our thoughts are with all of Joey’s loved ones.”

The <a href=”https://twitter.com/hashtag/Oilers?src=hash&amp;ref_src=twsrc%5Etfw”>#Oilers</a> organization is extremely saddened by the passing of our dear friend &amp; colleague, the legendary Joey Moss.<br><br>Once an Oiler, always an Oiler.<br><br>RIP, Joey. 🧡💙 <a href=”https://t.co/KJSkN9oO9W”>pic.twitter.com/KJSkN9oO9W</a>

Moss was a mainstay in the Edmonton sports scene and a beloved sports figure in the city. In addition to his locker room role, Moss is known for his enthusiastic renditions of O Canada.

“Edmonton lost a hero today,” the team said in a statement. “Joey’s bravery, humor, strength, work ethic and perseverance in our dressing room and in our community left indelible impressions that will live with us all.

“More than that, Joey endeared himself to everyone in our province, our country and beyond, no matter who they were. He was a symbol of what true teamwork is comprised of and we are all better for having known him. He touched us all.”

In 2012, Moss was recognized with a Queen Elizabeth II Diamond Jubilee Medal.