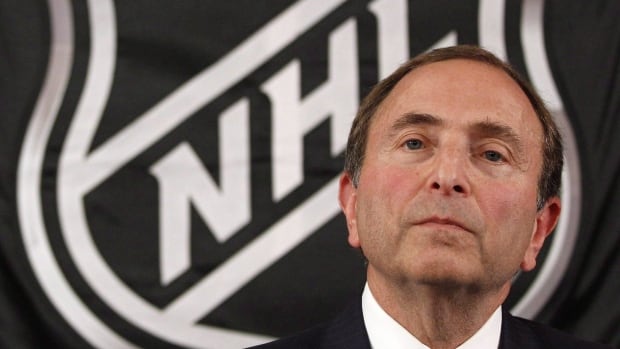 The NHL is zeroing in on a return to action with neutral-site games.

Commissioner Gary Bettman said Monday that the league is eyeing “probably eight or nine different places” that each would play host to approximately 12 teams.

Multiple media outlets have indicated that Las Vegas is one of the front-runners to be a host site. ESPN also reported that Minnesota, Edmonton, Toronto and Vancouver also have submitted proposals to the NHL. According to Sportsnet, Columbus is another possibility.

The NHL suspended play on March 12 due to the coronavirus pandemic, with teams having between 11 and 14 games left in the regular season. The structure of the season, if and when it resumes, remains uncertain.

“Do we complete the regular season when we’re given the opportunity?” Bettman said while speaking online as part of the Leaders Week sports business conference. “Do we do an abbreviated regular season, because our competitive balance is so extraordinary, it’s hard to tell how the season would have ended? Do we go right to the [Stanley Cup] playoffs and in what form?

“And if we’re not playing in front of fans, which at least in the short term seems [likely], do we do it in a centralized location or locations? And if so, what places might be suitable from a COVID-19 standpoint in terms of the communities that you’re in and how big the outbreak is? And what is the availability of testing? And so that requires a collaboration with our medical advisers.

“And I believe that all of the major sports in North America are going through this same exercise, and while the medical and health issues are probably to some extent the same for all of us, the logistics of what we do and how we do it may be a little different depending on the sport.”

WATCH | Dear sports, we miss you. Love, all of us:

CBC Sports partnered with The Gist to have fans submit sports videos off their phone. We all miss sports, and can’t wait for them to come back. 2:42

Multiple media outlets have reported that the NHL is weighing the possibility of a 24-team playoff tournament instead of the usual 16-team field.

In terms of when play might resume, Bettman said, “I don’t think anybody has a fixed timetable, particularly in North America right now. We have been working very hard since we took the pause on March 12 to make sure that whatever the timing is, whatever the sequencing is, whatever physical ability we have in terms of locations to play, that we’re in a position to execute any or all of those options. There is still a great deal of uncertainty.”

The league and the NHL Players Association reportedly have been in regular consultation regarding restart proposals. Complicating potential proposals is the fact that, according to Bettman, 17 percent of the players live outside of North America, and travel restrictions amid the pandemic will make returning difficult.

In addition, the border between the United States and Canada is closed to travel with the exception of essential business.

The league almost must devise a plan to secure the necessary COVID-19 testing for players and staff.

“I am told that there can be enough [testing] capacity, and certainly over the next couple of months, there will be more capacity,” Bettman said. “But that is a fundamental question, and we certainly can’t be jumping the line in front of medical needs.

“Everything we’re hearing from our fans is that they’re [eager] to get back, and we don’t take that for granted, which is why we will do what the medical people tell us is necessary and appropriate for us to do to bring fans back. And again, everything we do is going to be governed by the doctors, the medical people and by governments at all levels, which will tell us what is and isn’t appropriate for us to do.

“So a lot of our planning and a lot of the issues we’re confronting ultimately are going to be resolved for us by other people, whether it’s physicians or whether it’s governmental leaders, and that’s why we have to be doing a lot of contingency planning so we can react to whatever they’re telling is us appropriate and permissible.”