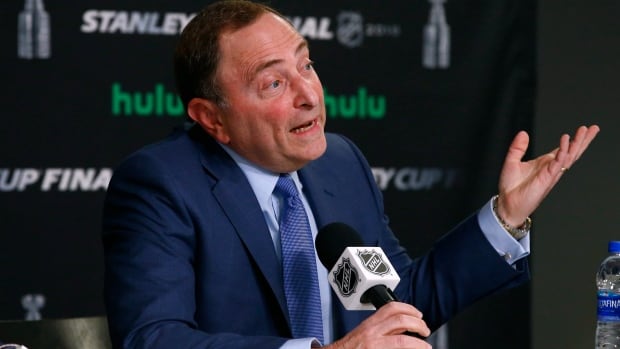 But if the league adds another team in Seattle in the near future, Bettman expects it to have every opportunity to accomplish the same feat under the same favourable expansion terms given to Vegas.

The commissioner also acknowledged that the Emerald City could secure that expansion team within the year.

The Golden Knights are hosting the Washington Capitals after winning the Western Conference in an inaugural season that “quite simply astonished the sporting world,” Bettman said in his usual state-of-the-league remarks before the Final opened on Monday night.

Sour grapes were understandable among the fans of other NHL teams after Vegas’ incredible ascent to the top of a league with 12 other teams that have never won the Stanley Cup and seven more that haven’t won it in the last 20 years.

The Golden Knights cleverly built this winner with an undeniably generous expansion draft that allowed them to select the likes of franchise goalie Marc-Andre Fleury and many other proven NHL players. Yet Bettman said he has received “no pushback whatsoever” about the favorable expansion draft from the league’s other 30 owners

“I think people (around hockey) are excited,” Bettman said. “I think it’s gotten their attention.”

Bettman and deputy commissioner Bill Daly both confirmed the NHL plans to keep the same rules on the next expansion draft. If it happens within the next two years, as increasingly expected, Vegas won’t have to lose any of its players, Daly added.

The vote on adding a Seattle franchise won’t happen in June when the board of governors meets during the league’s annual awards show in Las Vegas, Bettman said. But the board will get an update on Seattle’s plans, and a formal vote could happen later this year, perhaps at meetings in September or December.

While there were plenty of positives for Bettman and Daly on Monday, not all the topics brought up were rosy from the NHL’s perspective.

The league is currently facing a lawsuit from more than 100 former players who allege it had the resources to better prevent head trauma, failed to properly warn players of such risks and promoted violent play.

Bettman was asked Monday about his assertion in a deposition on July 31, 2015, that: “There’s no medical or scientific certainty that concussions lead to CTE.”

“I’m not going to start another news cycle,” he said. “There’s nothing new on the subject.”

Bettman was also asked about a report out of Ottawa Monday that former Senators captain Daniel Alfredsson told a blogger and former newspaper columnist that he hopes Eugene Melnyk sells the team.

Alfredsson reportedly wanted those comments to stay off the record, but the blogger still published the quotes.

Melnyk has had a strained relationship with his fanbase in recent years, with some fans paying for billboards in the nation’s capital with the hash tag “MelnykOut.”

“I can tell you for sure the franchise is not for sale,” Bettman said. “Eugene Melnyk is committed to the Senators and is passionate about them.”