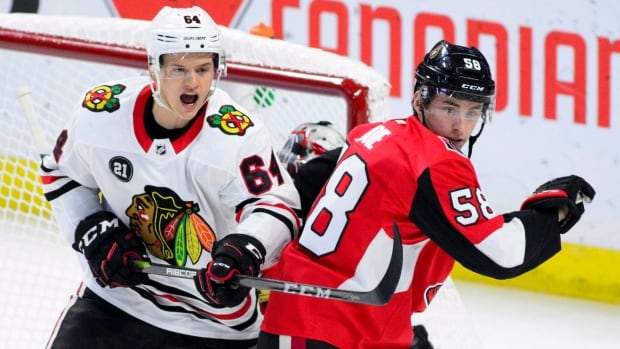 Patrick Kane scored in overtime as the Chicago Blackhawks spoiled the Ottawa Senators’ home opener with a 4-3 win Thursday night.

Maxime Lajoie scored in his NHL debut, while Colin White and Zack Smith also had singles for the Senators (0-0-1) as Craig Anderson made 37 saves.

With the Senators leading 3-2, Anderson was forced to make a number of stops in the third period as the Blackhawks pressed for the equalizer. Seabrook found a hole at the 12-minute mark as Kane found the veteran defenceman all alone in front for a one-timer to tie the game 3-3.

A scoreless second period saw both teams exchange a number of chances, but neither was able to capitalize.

The Senators had multiple opportunities on Ward’s left side, but couldn’t find a way to finish.

Despite being outshot 18-10 in the first period, the Senators led 3-2 after back-and-forth action.

Chicago opened the scoring as DeBrincat used Thomas Chabot as a screen before firing a shot past Anderson. Ottawa tied the game as Smith’s shot deflected off Duncan Keith. The goal was Smith’s first since Feb. 21, also against Chicago.

The Hawks regained the lead midway through the period as Toews came down the wing and fired a shot off Anderson’s shoulder.

The Senators tied it as Matt Duchene found Lajoie, who jumped into the slot and one-timed it past Ward for his first career NHL goal in his first NHL game. A late power-play goal by White off a pass by Lajoie allowed the Senators to take a 3-2 lead.

Despite season ticket holders being offered two free additional tickets, the Canadian Tire Centre was far from a sellout for the home opener.