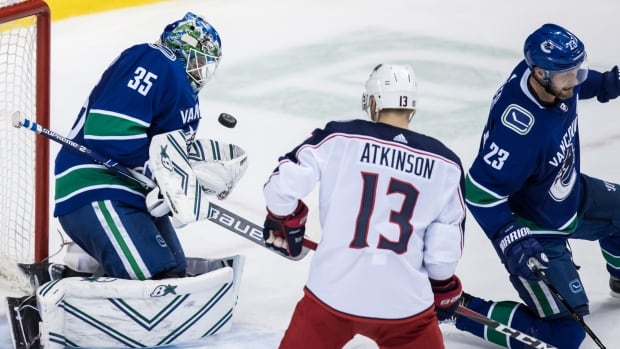 Pierre-Luc Dubois broke out of a slump with a goal and an assist while goaltender Sergei Bobrovsky returned from injury to stop 21 shots as the Columbus Blue Jackets improved their NHL playoff chances with a 5-0 win over the Vancouver Canucks Sunday night.

Josh Anderson, with two goals and an assist, Ryan Dzingel and Oliver Bjorkstrand also scored for the Blue Jackets (41-30-4), who moved to within two points of the Montreal Canadiens for the second wild-card spot in the Eastern Conference. Columbus also snapped a three-game road winless streak.

Dubois had gone 11 games without a point and was goalless in 13.

The shutout was the seventh of the season for Bobrovsky, who had missed one game with an upper-body injury. Two of his best saves came in the second period when he stopped Bo Horvat and Markus Granlund on Canuck power plays.

The Canucks (32-34-10) trail the Colorado Avalanche by seven points for the final wild-card spot in the Western Conference. Vancouver lost 3-1 to the Calgary Flames Saturday night.

It was the 10th time this season the Canucks have been shutout, the most of any team in the NHL.

A pair of Canuck turnovers helped the Blue Jackets build a 3-0 lead after two periods.

Dubois made it 2-0 with just 56 seconds gone in the second. Artemi Panarin picked off a Canuck pass then fed Dubois, who scored on a screened shot. Another turnover in the neutral zone allowed Anderson to carry the puck deep into the Vancouver zone. He passed to an open Dzingel, who scored on a backhand.

Anderson scored the only goal of the first period at 16:19. He collected a loose puck near centre ice that got past Horvat then skated around defenceman Derrick Pouliot before beating Demko with a laser shot.

The Blue Jackets continued the attack in the third. Anderson scored his second of the game on a two-on-one breakaway at 10:54 while Bjorkstrand collected his 16th of the season at 7:32.