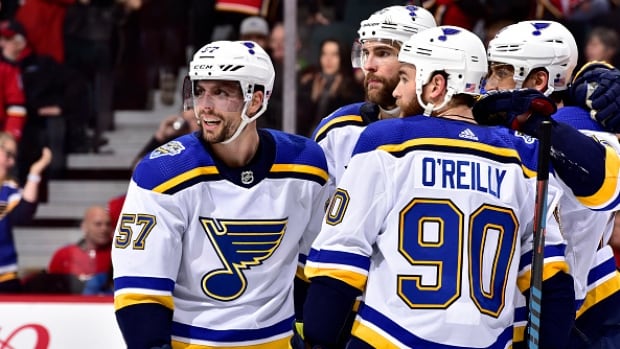 David Perron had two points including the overtime winner as the St. Louis Blues extended their winning streak to seven games on Saturday night with 3-2 victory over the Calgary Flames.

After TJ Brodie was sent off in the extra period for a hold on Jaden Schwartz, the Blues took advantage with Perron’s eighth goal of the season.

Ryan O’Reilly also had a goal and an assist for St. Louis (12-3-3), which completes a perfect four-game road trip and improves its road winning streak to five games. Ivan Barbashev also scored.

Calgary scored two unanswered goals to force overtime, but David Perron snapped home his 3rd OT-winner of the season to hand the Blues the 3-2 win. 1:31

Matthew Tkachuk with his 10th goal and Travis Hamonic scored for Calgary (10-7-3), both goals coming in the last half of the third period.

The Flames trailed 2-0 at the halfway point of the third, but they climbed to within one at 10:59 when Tkachuk rattled home a centring pass from Andrew Mangiapane.

With the teams playing four skaters aside due to coincidental minor penalties, Hamonic tied it at 16:04, shovelling a backhander past Binnington.

The Blues made it 2-0 at 13:06 of the second on O’Reilly’s fifth goal and team-leading 18th point came on the power play. Perron fed a pass to O’Reilly open in the slot and he one-timed a shot inside the far goal post.

The goal came with Mark Giordano off for high-sticking, a penalty that came less than a minute after Calgary had killed off a delay of game penalty to Mark Jankowski.

The Blues, who entered the day with the league’s third best power play, finished 2-for-4 on the power play, During the winning streak, they’re 8-for-23.

Earlier in the second, Calgary had squandered a chance to tie it, Michael Stone blasting a shot over the net from 30 feet out after he was set up in the slot on an odd-man rush by Mikael Backlund.

The lone goal of the first period came from Barbashev who wrapped the puck into the open side just 3:17 into the game.