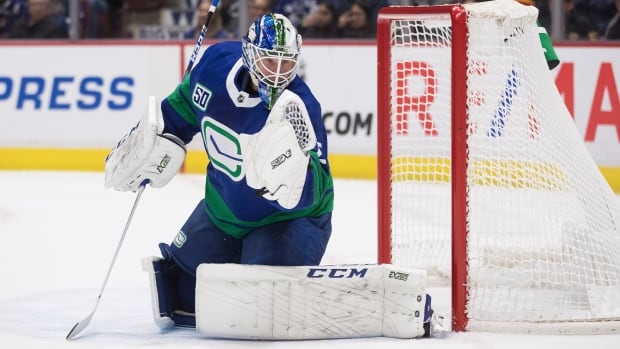 Jaden Schwartz scored at 3:28 of overtime to give the St. Louis Blues a 2-1 victory over the Vancouver Canucks on Tuesday.

The winner came on a 3-on-0 after Vancouver’s Tyler Myers fired a shot that missed wide of the opposition’s net and went the length of the ice with three Blues chasing. Schwartz finished off a tic-tac-toe play alongside Alex Pietrangelo and Brayden Schenn.

Canuck goaltender Jacob Markstrom smashed his stick in anger after the goal.

Vancouver (9-3-3) rookie Quinn Hughes tied the game 1-1 with 3:35 remaining. Hughes sent a fluttering shot from the blue line that went over the shoulder of Blues goaltender Jordan Binnington. Elias Pettersson was screening on the play.

Tyler Bozak, with his first goal of the season, also scored for the Blues (10-3-2). Binnington finished the night with 33 saves and is 6-1-0 his last seven games.

It was the fifth consecutive win for the defending Stanley Cup champions, who are 7-1-0 in their last eight games.

The Canucks had a chance to tie the game earlier in the third when the David Perron was called for cross-checking Canucks defenceman Chris Tanev at 5:44 of the third period. Vancouver managed just one shot on the power play and finished the night 0 for 4 on the power play, with just six shots.

Jake Virtanen also came close in the third when he rang a shot off the post at 7:51. Brandon Sutter had a short-handed breakaway at 10:45 but couldn’t beat Binnington.

Bozak’s goal came at 3:37 of the second period. Sammy Blais made a nice play in the corner, feathering a puck between two Canucks defenders to Bozak, who tucked the puck past Markstrom.

The first period was scoreless but Vancouver had two great chances. Early on Pettersson turned a Brock Boeser pass into a breakaway but was stopped by Binnington. Later J.T. Miller found himself alone in front of the net but he too couldn’t beat the Blues goalie.

Pettersson had another chance in the second period. He used his speed to distance himself from a pair of Blues chasing him and ripped a shot that Binnington got a piece of.