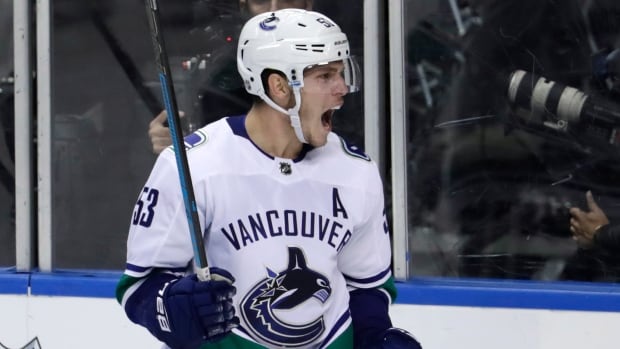 Bo Horvat scored the tie-breaking goal in the third period, leading the Vancouver Canucks to a 3-2 victory over the Florida Panthers on Saturday night.

Horvat gave the Canucks their first lead when he took a nifty pass from Sven Baertschi in the left circle and sent a one-timer in at 6:11 of the final period.

Pettersson tied the score 1-1 on a power-play goal with 5:12 left in the period as his wrister from the right circle beat Reimer. Pettersson tied the Canucks’ franchise record with a five-game point streak to start a career, but was forced to leave the game in the third period.

The 19-year-old was taken hard into the end boards, then slammed to the ice by Panthers defenceman Mike Matheson and needed assistance from the trainers to the locker-room.

There was no immediate update from the team on his status and Matheson wasn’t penalized on the play.

Vincent Trocheck and Jonathan Huberdeau scored for the Panthers, who remain winless through three games. James Reimer made 27 saves.

With the score tied 1-1, Trocheck put the Panthers ahead on a shot from the right circle the got past Nilsson on the glove side with 2:40 left in the second.

Less than a minute later, Roussel was awarded a penalty shot after he was hooked by Bogdan Kiselevich. Roussel beat Reimer on the glove side at with 1:45 left to tie the score 2-2.

Huberdeau gave Florida a 1-0 lead with 7:29 left in the second when he poked in his own rebound.