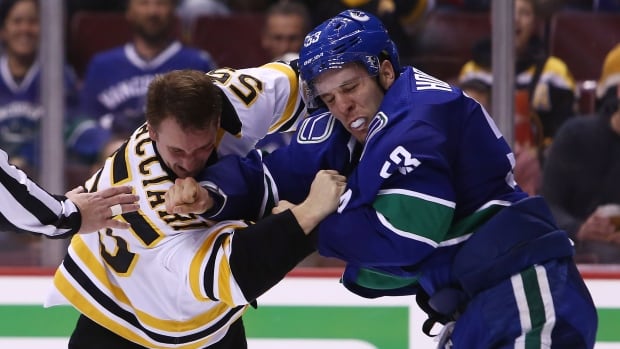 Bo Horvat scored at 3:12 of overtime as the Vancouver Canucks edged the Boston Bruins 2-1 on Saturday.

Brandon Sutter scored for the Canucks (4-4-0) in regulation and Joakim Nordstrom responded for the Bruins (4-2-2).

Canucks goalie Jacob Markstrom stopped 30 shots while Jaroslav Halak turned away 20-of-22 shots for the Bruins.

Sutter opened the scoring less than four minutes into the game following a scramble in front of Boston’s net. The centreman grabbed the puck from the fracas and slipped it in under Halak’s leg for his third of the season.

After a scoreless second frame, the Bruins came out fired up in the third, pressing the Canucks defence and repeatedly putting shots on net.

Nordstrom notched the equalizer midway through the period, ripping a shot from the top of the face-off circle. The puck skimmed Markstrom’s left glove as it sailed into the back of the net.

Nordstrom also seemed to spark some animosity between the two clubs.

Horvat hit the Swedish centreman midway through the second period, a move that Boston’s Noel Acciari apparently took issue with.

Horvat and Acciari dropped their gloves and traded blows, with Horvat knocking off Acciari’s helmet and Acciari eventually tossing Horvat to the ice.

Both teams were missing key players Saturday night, including Boston’s David Backes, who was originally in the lineup. The Bruins tweeted before the game that the right winger wasn’t feeling well.

Boston was also without Kevin Miller, who hurt his hand against the Oilers on Thursday and Charlie McAvoy, who’s suffering an undisclosed injury. The club has said both defencemen have been sent back to Boston for “further testing.”

Vancouver is still without rookie sensation Elias Pettersson, who suffered a concussion on Oct. 13, and centreman Jay Beagle, who’s healing from a broken arm.

The game was just the second at home for the Canucks this season, following a two-week-long road trip that saw them collect a trio of wins over six games.

The Canucks will be back at Rogers Arena Monday night to host the Washington Capitals.