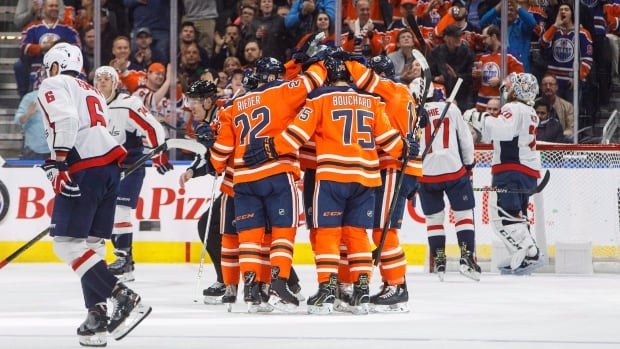 Evan Bouchard scored his first NHL goal and Ryan Nugent-Hopkins had a goal and an assist as the Edmonton Oilers earned a 4-1 victory over the defending Stanley Cup champion Washington Capitals on Thursday.

Alex Chiasson and Connor McDavid also scored for the Oilers (4-3-1), who snapped a two-game losing skid. Cam Talbot made 31 saves in the victory.

Andre Burakovsky replied for the Capitals (4-3-2), who have lost two of their last three.

Edmonton got on the board first with a power-play goal with 3:32 left in the opening period when Bouchard scored on a shot from the point with Capitals goalie Braden Holtby screened on the play.

The rookie became the youngest defenceman in Oilers history to score a goal after turning 19 on Oct. 20.

The Oilers added to their lead midway through the second on a short-handed tally when Nugent-Hopkins picked off a pass, undressed Niklas Backstrom and beat Holtby for his third of the season.

Washington got that goal back a couple of minutes later as Nic Dowd found Burakovsky alone at the side of the net and he put his first of the season past Talbot.

Edmonton made it 3-1 midway through the third when Chiasson picked the top corner on a long-range bomb, his third goal in the last two games.

McDavid added an empty-netter to put the game away.