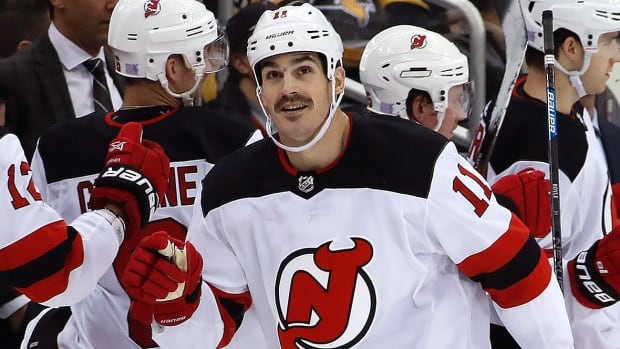 New Jersey Devils forward Brian Boyle wants to serve as a role model in the fight against cancer.

He certainly was inspiring on Monday night.

The cancer survivor scored three times for his first career hat trick, leading the visiting Devils to a 5-1 victory over the slumping Pittsburgh Penguins.

Boyle got his natural hat trick on “Hockey Fights Cancer” night in Pittsburgh. It included two power-play goals and two redirections in front of the net.

“I love these nights, I really do,” Boyle said. “Just the initiative and seeing the survivors on the ice and being recognized. Sometimes you feel kind of alone. It can be a dark place at times during a cancer fight. But to be seen, the support everybody shows and the money raised, it’s just a phenomenal thing.”

There’s ups and downs, just like life. … I think it’s important to reach out and ask questions if you need help.— Devils forward and cancer survivor Brian Boyle after his hat trick performance on Monday night

The 33-year-old Boyle was diagnosed with a form of bone marrow cancer at the beginning of training camp last season. He underwent treatment, returned to the lineup last November and won the NHL’s Masterton Trophy for best exemplifying qualities of perseverance, sportsmanship and dedication to hockey.

“There’s ups and downs, just like life,” Boyle said. “The worst kind of part of it was when people felt sorry for you. They don’t know what to say, and you want them to feel comfortable around you. I think it’s important to reach out and ask questions if you need help.”

Boyle gave the Devils a 2-1 lead in the first period when he tipped a Ben Lovejoy shot behind Penguins goalie Matt Murray from the top of the crease.

‘Scoring goals the most fun thing’

Boyle extended the lead with a power-play goal in the second period. His between-the-legs redirection from the top of the crease made it a 3-1 game.

Boyle scored his second power-play goal off a one-timer from Taylor Hall with 19.7 seconds to play in the second period. Hall has at least one point in 10 of 12 games this season.

“Scoring goals is the most fun thing in hockey, as an individual player,” Boyle said. “And then you can help a team win a game, especially the way we’ve been going lately, it’s a big one for us.”

Will Butcher had a goal and two assists for New Jersey, and Travis Zajac scored his fourth goal. Jean-Sebastien Dea, who spent the last two seasons in Pittsburgh, had two assists.

The Devils stopped a three-game slide with their first road win. They were outscored 15-6 during the losing streak.

Keith Kinkaid made 35 saves for New Jersey, which has won four of its last five against Pittsburgh.

Jamie Oleksiak scored for the Penguins, who have dropped four in a row.