Just like Patrick Roy was the peerless member of the 2006 Hockey Hall of Fame inductees, Martin Brodeur is unequaled among his class.

The New Jersey Devils legend was the easiest to make a case for among player inductees Martin St. Louis, Aleksander Yakushev and Jayna Hefford as well as builders Willie O’Ree and Gary Bettman.

Since Roy, Brodeur is only the third goalie to garner Hall of Fame status. Ed Belfour was inducted in 2011, followed by Dominik Hasek three years later. And while both Belfour and Hasek were the league’s most dominant goalies at times during their careers, when it comes to the game’s greatest goalies — especially in the post-1967 expansion era — it’s between Brodeur and Roy.

Roy shattered Terry Sawchuk’s record for regular-season victories of 446 by finishing with 551. Brodeur later left Roy in the dust with 691, although 42 wins were of the shootout variety, an overtime twist that was introduced after Roy had retired in 2003.

Brodeur won the 1993-94 Calder Trophy, while Calgary Flames defenceman Gary Suter won the 1985-86 rookie award in Roy’s first season. Yet, another little-known fact about Roy was that he won a Calder Cup. After his final junior season concluded in Granby, he joined Sherbrooke Canadiens and steered the underdog club past Fredericton, Maine and Baltimore to win the AHL championship.

Who do you think is the greatest goalie ever? 🤷‍♂️

Brodeur and Roy were teammates on the 1998 Canadian Olympic team, but Roy played the entire tournament and posted an impressive .935 save percentage. Canada, however, was beaten by Hasek and the Czech Republic on Robert Reichel’s shootout goal in the semifinals in Nagano, Japan.

Brodeur had more international success. He almost became a member of the Triple Gold Club (winner of a Stanley Cup, Olympic gold and World Championship). But twice at worlds, in 1996 and 2005, Canada was defeated by the Czechs in the final. Brodeur backed up Curtis Joseph in 1996 and was in goal for a 3-0 loss nine years later.

With Roy being seven years older, Brodeur idolized the superstitious former netminder of the Montreal Canadiens and Colorado Avalanche.

The younger goalie liked to tell the story of how he and some friends got into trouble when they skipped school to ride their bikes from the Saint-Leonard neighbourhood to downtown Montreal at Ste-Catherine and Peel to watch Roy drive by in the 1986 Stanley Cup parade. 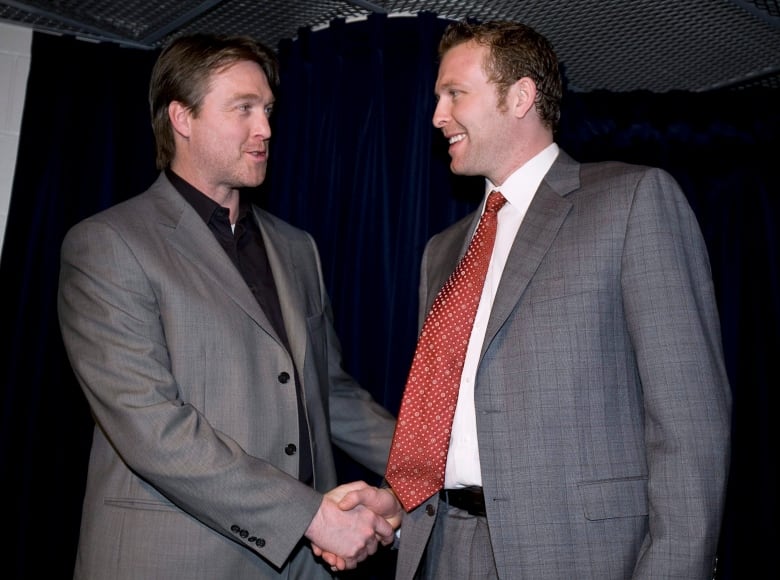 Brodeur’s father, Denis, was the longtime Canadiens team photographer. His pictures hung in Martin’s bedroom and when Brodeur was 16, he met Roy on a photo shoot Denis had lined up.

But when Brodeur joined the Devils, he no longer idolized Roy.

One of the best terms to describe their relationship is “frenemies.” Brodeur wanted to beat Roy. He was disheartened to lose his first game against the Canadiens icon which was won by Roy 2-0 with a 41-save shutout early in the 1993-94 season. A few weeks later in Montreal, Brodeur beat Roy 4-2 with a 31-save effort.

The tipping point in their rivalry and what gives Roy a slight edge over Brodeur was the 2001 Stanley Cup Final between the Devils and Avalanche.

Both goalies downplayed their rivalry entering the final. Roy was 35 and nearing the end of his career. Brodeur had just turned 29 and was in the middle of his stay in the NHL.

The championship was there for the taking for the Devils. They enjoyed a 3-2 series lead with Game 6 in New Jersey. Roy snuffed out the Devils with 24 stops for his second shutout of the series and was the better performer two nights later in Denver to win his fourth and final league championship as well as his third Conn Smythe Trophy.

The two shook hands at centre ice. Roy with his mask off — and Brodeur still wearing his. Brodeur refused to discuss the result afterwards. Roy remarked how individual awards were nice but that championships mattered most to him.

And in the end, Roy owns that one extra ring.

Enough said in the matter of Patrick Roy versus Martin Brodeur.