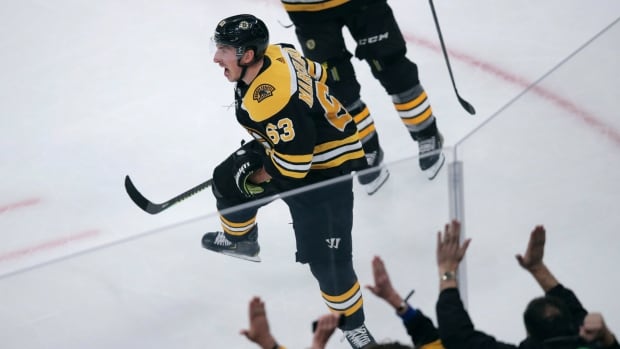 Brad Marchand scored his second goal of the game with 1:57 left in the third period, and the Boston Bruins beat the Pittsburgh Penguins 6-4 Monday night after blowing a 3-0 lead.

Marchand skated in down the left wing and fired a wrister that hit the far post and went into the net off the back of goalie Tristan Jerry. Krug’s one-timer from the right circle had tied it 4-4 midway into the third.

The Penguins then outshot Boston 15-4 over the remainder of the period, scoring four times to take the lead.

Kahun started the comeback when he fired a tough-angle shot into the net from near the bottom of the right circle at 5:35. Bjugstad then sliced the deficit to one 4:21 later when he broke in alone off a pass from Kris Letang and fired a wrister that caromed into the net off the right post.

Evgeni Malkin backhanded a pass from along the boards, finding Rust alone in the slot. He beat Halak with a wrister to the glove side, tying it at 15:59.

Marino, who was off for tripping, stepped onto the ice as his penalty expired, collected a loose puck near centre ice, skated in on a clean breakaway and shifted to the backhand before tucking it behind Halak and pushing the Penguins in front with 2.4 seconds left in the period.

Players on Pittsburgh’s bench were jumping up and down when Marino scored to cap the huge comeback and a frustrated Halak smashed his stick off the crossbar into a couple of pieces, tossing the handle off the backboards when he was done.

Marino grew up about 45 minutes away in Easton, Massachusetts, and attended Harvard.

Marchand used a baseball-style swing to bat a loose puck out of the air and into the net, making it 2-0.