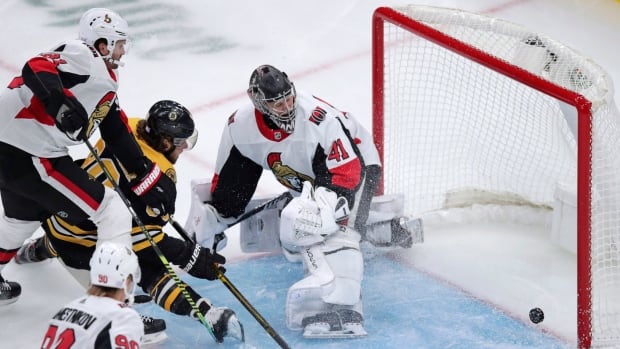 David Pastrnak had a goal and two assists as the Boston Bruins beat Ottawa 5-2 Saturday night, in a game in which the Senators’ Scott Sabourin was taken to a hospital for evaluation after being taken off on a stretcher.

Sabourin was taken from the ice with his head immobilized following a collision with David Backes in which the players’ helmets hit at nearly full speed early in the first period. Sabourin gave the crowd a “thumbs up” as he was taken from the arena.

Patrice Bergeron, Brad Marchand, Danton Heinen and Jake DeBrusk also scored for Boston (10-1-2), which has lost just once in regulation this season. The Bruins have won five straight.

Tuukka Rask made 30 saves for the Bruins, including eight when Boston was short-handed for six straight minutes.

After a scary collision with Boston’s Backes, the forward had to be taken off the ice on a stretcher. According to the Senators, he was speaking and moving his extremities at the hospital. 1:24

After colliding with Backes, Sabourin fell to the ice and appeared to be unconscious. There was a large blood spot on the ice under his face.

The Senators sent an update on their Twitter saying he was conscious and speaking with the attending doctors while leaving the arena.

Update: Ottawa Senators forward Scott Sabourin was transported to local hospital by ambulance for evaluation. He was conscious and speaking with the attending doctors at the time of leaving the arena.

Backes went to the dressing after Sabourin was taken from the ice and didn’t return. The Bruins announced that Backes had an upper-body injury. He was visibly upset, fighting back tears, as medical personnel attended to Sabourin.

Heinen scored 5:43 into the third period, hustling in for a loose puck, to make it 3-2.

While on a power play, Pastrnak skated with the puck and looked as if he was going around the net before sending a pass in front to Marchand, who scored 1:07 later.

Pastrnak’s power-play goal made it 1-0 just 1:17 into the opening period when he outskated defenceman Ron Hainsey to the puck after Boston defenceman Torey Krug sent a long pass that caromed off the backboards. Pastrnak shifted and tucked the puck behind Anderson.

Duclair tied it on a one-timer from the right circle 12:04 into the period.

Pastrnak set up Bergeron’s goal, making a soft pass across the crease, to make it 2-1 at 1:51 of the second, but the Senators tied it on Brown’s goal that caromed in off the heel of Rask’s stick at 3:04.

Marchand was given two minutes for hooking and a double-minor for spearing at the same time early into the second and Rask was splendid.