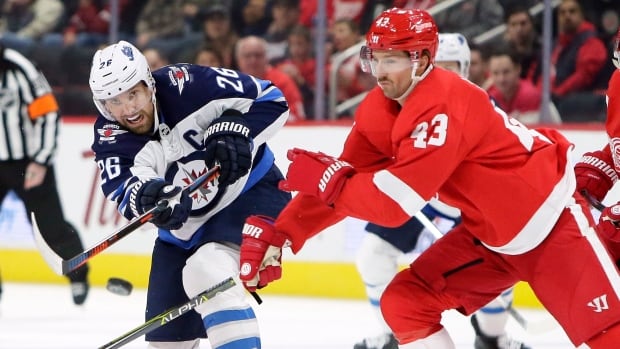 Defenceman Dustin Byfuglien got his 500th career point when he snapped a tie with 6:45 left, and the Winnipeg Jets beat the Detroit Red Wings 2-1 on Friday night.

Andreas Athanasiou scored for Detroit and Jimmy Howard made 38 saves. Red Wings defenceman Mike Green made his season debut after recovering from a virus that attacked his liver.

Byfuglien skated in from the point and beat Howard from the bottom of the right circle. Howard got some of the shot with his glove but the puck dropped into the net.

Connor tied it at 1 with a power-play goal with 3:46 remaining in the middle period. He backhanded a loose puck into an empty net from in front.

It was the fifth goal for Connor, who is a native of the Detroit suburb of Shelby Township.

The Jets outshot the Red Wings 21-4 in the second. Howard stopped Bryan Little on a breakaway with 7:38 left and made a spectacular glove save on Little’s tip with 4:17 remaining in the period.

Athanasiou’s power-play goal gave Detroit a 1-0 lead with 4:33 left in the first. He converted a one-time slap shot from the top of the right circle. It was Athanasiou’s fourth goal and his second in two games.

Detroit’s Gustav Nyquist hit the crossbar early in the game and teammate Darren Helm hit the goal post on a short-handed rush with 2:25 remaining in the opening period.