A city council committee is recommending that it’s time to reopen talks with the Flames on a new arena in Victoria Park.

Talks between the two sides collapsed in bitter acrimony last year, with Flames CEO Ken King saying the city’s offer on a new rink fell far short of what the team wants.

The committee then voted to ask city council next week to restart the talks.

‘Is this a priority?’

“At this point, we really have to see: is this a priority? If it is, do we have a partner, and if so, how do we figure that into the upcoming budget talk?” said Davison.

But he added that it’s about way more than just an arena. It’s the redevelopment of Victoria Park as a whole.

Michael Brown, CEO of CMLC, told the committee that a new arena would be at the heart of a revitalized entertainment district.

Once CMLC has $150 million to spend on improving the area’s connections and streetscapes, a properly designed arena would help draw development to the district, he told the committee.

Brown outlined plans to construct a level crossing at 17th Avenue S.E. to open up Stampede Park, build a new underpass at Fifth Street S.E. under the CP Rail tracks, build a new Ninth Avenue bridge over the Elbow River and extend the Riverwalk southward along the Elbow.

Drawings from Flames a glimpse of future?

He then showed conceptual drawings from the Calgary Sports and Entertainment Corporation, which were done by Rossetti, a Detroit-based architectural design firm.

The renderings illustrate how the new arena could add to the streetscape that CMLC is planning for Olympic Way and that it wouldn’t just be a big box.

Brown said he likes the possibilities a modern arena design can bring.

“I think they did a fantastic job of having a concept — and it is just a concept — that will really become a part of the community, not just that starship that’s dropped in,” Brown said.

No other details on an arena, such as cost or number of seats, were provided with the pictures.

Brown said CMLC is hearing from developers who are interested. 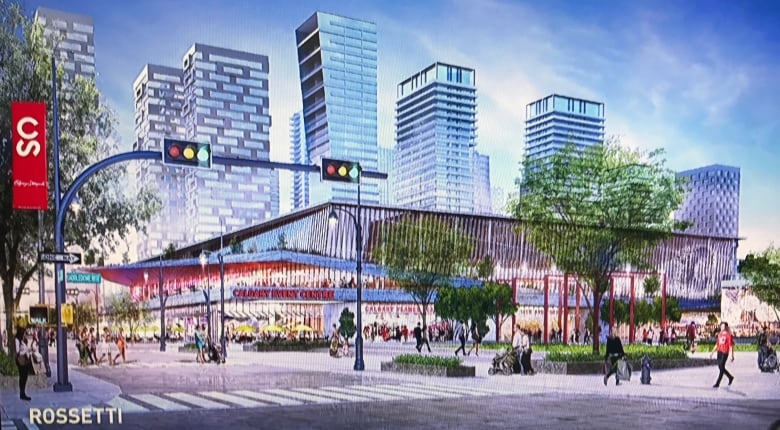 This rendering of a proposed arena in Victoria Park shows how it would fit into the streetscape that the Calgary Municipal Land Corporation is planning on Olympic Way. This is the view from 14th Avenue S.E. (Rossetti/Calgary Flames)

“When the developers call me, hoteliers, residential building developers, when they call, they’re all quite excited, but it’s similar to the East Village [development]. They’re not going to put their foot in first,” said Brown.

“They want to see others do that.”

When the East Village is built out, Brown estimates it will be generating about $30 million in tax revenues for the city every year.

At full build-out, he sees a potential tax lift from Victoria Park of $50-60 million annually.

For Brown, it’s not about whether a new arena is built there.

“There will be an events centre. It’s just when does it happen.”

Coun. Peter Demong said council has a lot of projects that it’s weighing.

They include an Olympic bid, an expansion of the BMO Centre at Stampede Park, revitalizing Arts Commons and updating Olympic Plaza.

For him, he’ll take a new entertainment district over a possible 2026 Olympic bid.

“This is how you build a good city. And if it comes down to a cost basis between this project and the Olympics, I’m going to go with this one every single time,” said Demong.

He’s opposed to an Olympic bid even though he says there could be some value in it for revitalizing some of Calgary’s aging sports facilities.

“What we’re talking about spending at the Olympics isn’t going to do much of anything for this area, which is what we’re trying to focus on.”

City council will look at the CMLC presentation and discuss the idea of reopening arena talks at its next meeting on Tuesday.