Years before starring at the University of Wisconsin, Sarah Nurse remembers being told she didn’t have a future in hockey.

“One of my dad’s friends completely brushed me off and was like, ‘You’re never going to get anywhere playing hockey. There’s nowhere for you to go,'” says Nurse, a fourth-year forward with the Canadian national women’s team.

“My dad was always the one to say, ‘There are places that you can go if you want this and it’s your passion. You can go to the Olympics.'”

The 23-year-old Nurse, an Olympic silver medallist this past February, is hoping there are plenty of dads like Roger Nurse in the stands Saturday afternoon in her hometown Hamilton to celebrate Girls’ Hockey Day.

Nurse and Canadian teammates Natalie Spooner and Renata Fast will be special guests of the Ontario Hockey League’s Hamilton Bulldogs, who for the second straight year heeded the call of Hockey Canada and partnered with local minor hockey associations for the International Ice Hockey Federation’s World Girls’ Hockey Weekend to help grow the women’s game at all levels.

In its ninth year, WGHW is a global opportunity for girls to try hockey, help grow the game and unite through grassroots programming.

At FirstOntario Centre (formerly Copps Coliseum), about 1,500 players are expected to attend, with a bantam AA game scheduled for 11:30 a.m. ET on Saturday, followed by a 1 p.m. midget game between the Stoney Creek Sabres and Hamilton Hawks that will be televised on Cable 14 ahead of the Bulldogs-Peterborough Petes OHL contest at 4 p.m.

Prior to the junior game, members of the Sabres and Hawks will stand along the respective blue-lines of the Bulldogs and Petes as Nurse, Spooner and Fast — who play together with the Toronto Furies of the Canadian Women’s Hockey League — take part in the ceremonial faceoff. They will also sign autographs during the day. 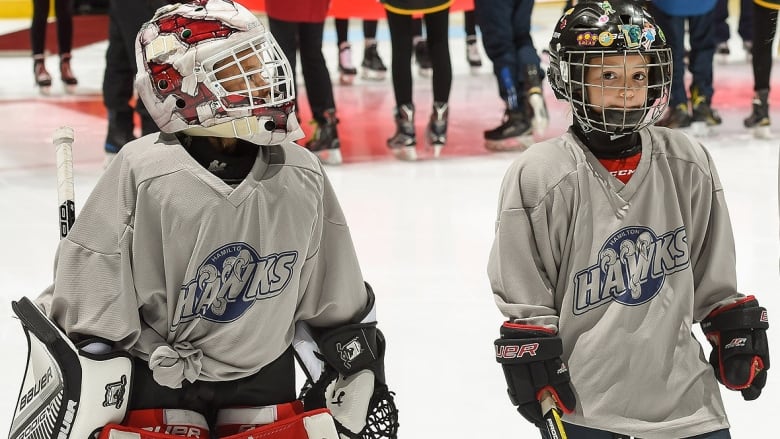 The Hamilton Hawks are one of many girls’ minor hockey associations across Canada that will take the ice on Saturday and Sunday to celebrate World Girls’ Hockey Weekend, aimed at helping grow the women’s game at all levels. (Brandon Taylor/ProAm Images/File)

“One of our goals is to help the Toronto Furies gain more exposure in the Hamilton area,” says Bulldogs marketing co-ordinator Robin Schneider, “as they are the closest professional women’s team to the city.”

Earlier in the day, three or four minor teams will be involved in a 60-minute Skills Surge session — the signature event of World Girls’ Hockey Weekend — with a Bulldogs coach and two players demonstrating each drill provided by Hockey Canada and available to all Canadian minor hockey associations and their teams by accessing the organization’s app.

‘Blown away by the experience’

“I’ve had a couple of counterparts from teams [across the OHL] ask what our blueprint is and how we executed this event. Seeing the girls and how excited they were talking about their game and then playing a game [last year] was special. Everyone was blown away by the experience, so we wanted to make it bigger and better.”

Nurse, who played boys’ hockey “until [age] 11 or 12,” believes women’s hockey turned a corner in Canada following the 2010 Olympics in Vancouver, where the home side blanked the United States 2-0 in the gold-medal game.

“That game showed how talented and skilled women’s hockey players are,” says Nurse, who scored 76 goals and 137 points in 149 collegiate games. “After Vancouver, I think people thought [women’s hockey] is here to stay.

“Now, with working on televising the Four Nations Cup and world championship, I think the visibility of the national women’s team and CWHL is incredible, and there’s a passion and drive that little girls believe there’s a next step for them.”