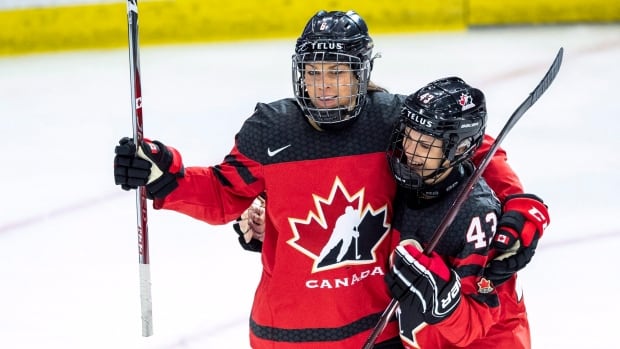 Canada wants to wrest one women’s hockey title away from the United States when the two countries meet in the final of the Four Nations Cup tournament Saturday.

Canada advanced to the gold-medal game with a 3-0 win over Finland on Friday.

Emerance Maschmeyer repelled 14 shots for a shutout in her first start of the tournament.

The Americans doubled Canada 2-1 in a preliminary-round game.

Canada’s Daoust and Johnston scored on Noora Raty in the first five minutes, but the veteran Finn was a workhorse with 45 saves in the loss.

The Finns had just 16 skaters Friday, which was one more than they had in a 3-2 win over the Swedes on Wednesday.

Illness began working its way through the team after playing an exhibition game against Canada in Prince Albert, Sask., on Sunday night.

Canada had a few unwell players that didn’t finish Tuesday’s 6-1 win over the Swedes, but was not as hard hit by the bug as the Finns were.

The hosts held Finland scoreless on three power-play chances in the opening period. Johnston scored at 4:55 and Daoust just 25 seconds after puck drop.

Both countries were held scoreless on four power-play chances.

Forward Brianne Jenner drew back into Canada’s lineup after sitting out the first two games of the tournament with an undisclosed injury.

Hannah Brandt had a goal and an assist and Melissa Melissa Samoskevich scored a short-handed goal for the U.S. in the earlier victory over the Swedes.

Sydney Brodt, Brianna Decker and Dani Cameranesi rounded out the scoring for the Americans. Goaltender Emma Polusny had 18 saves for the win.

Sweden’s Sabina Kuller scored and Emma Soderberg stopped 34 of 39 shots in the loss.