Toni Utunen scored 5:17 into overtime as Finland shocked Canada 2-1 on Wednesday in a dramatic quarterfinal at the world junior hockey championship.

Vancouver Canucks prospect Michael DiPietro stopped 32 of 34 shots in net and was named the player of the game for Canada (3-0-1-1).

Canada was last ousted from the tournament’s quarterfinals in 2016 in Helsinki, also by Finland, which went on to win the gold medal that year.

DiPietro was finally beaten at 19:13 of the third period after Canadian defenceman Ty Smith fell in the corner, allowing Eeli Tolvanen to put a shot off the outside netting of Canada’s net. It rebounded to him and Tolvanen’s second shot bounced off Heponiemi’s ankle and squeaked past DiPietro into the net.

Canada’s best chance in overtime came off a penalty shot after defenceman Evan Bouchard was hauled down.

DiPietro made some miraculous saves in the first period, keeping a nervous-looking Canadian crew in the game.

Finland kept the pressure high, forcing turnovers and exploiting gaps in coverage. They outshot the Canadians 11 to seven in the first frame, but the scoreboard remained empty at the intermission. 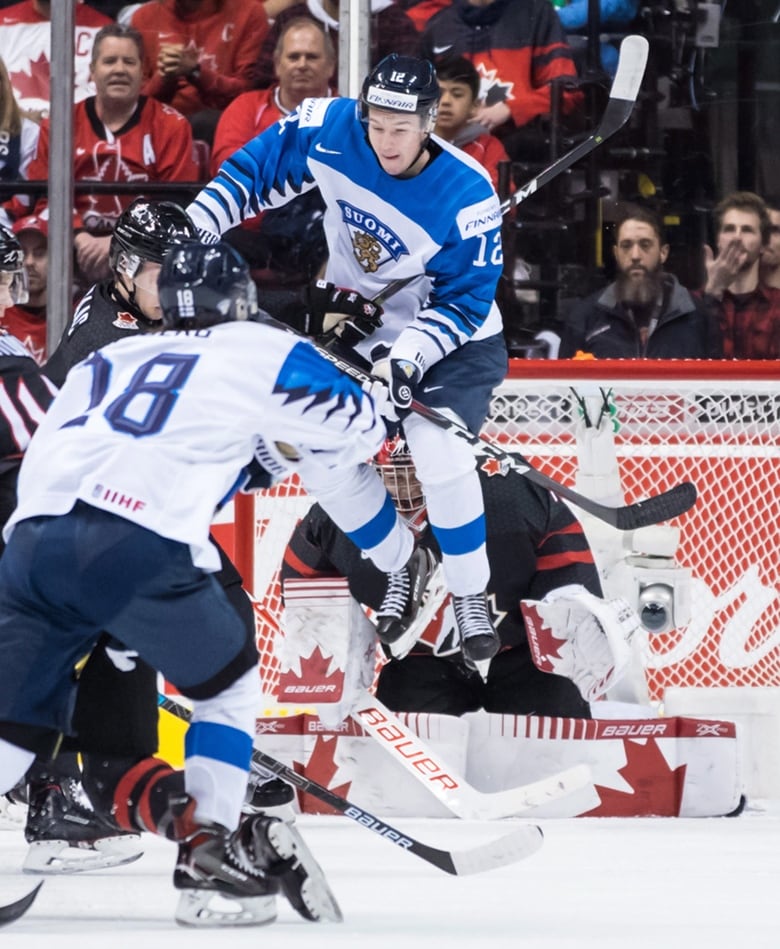 Canada came back with more energy in the second and scored 1:30 in.

Arizona Coyotes prospect Barrett Hayton dropped to his knees to protect the puck deep in the Finnish zone and dished it out while being smothered by defenders.

Mitchell picked up the pass and quick shot off, firing a rocket in past Luukkonen to put Canada up 1-0.

Heinola crawled along the ice in pain as the play moved to the other end of the ice before he was eventually helped off by a trainer, favouring his left leg.

The 17-year-old, who’s eligible for the 2019 draft, went directly to the locker room and did not return for the third period. No penalty was called on the play.

The hit seemed to once again ignite the Finns. Minutes later, Tolvanen stole the puck and streaked down the ice for a breakaway.

DiPietro made the initial stop, then dropped flat to save the rebound, too. The crowd of 17,047 responded with chants of “Dee-pee-et-ro!”

The goalie’s teammates helped out in the third frame, keeping the puck in the Finnish end for much of the period.

Finland had a pair of wins over Slovakia and Kazakhstan in the tournament’s round-robin phase, while Canada put up a trio of wins before losing 2-1 to Russia on New Year’s Eve.

The Canadians also dropped a pre-tournament match up with the Finns 5-2.

The teams still in the tournament will have Thursday off before the semifinals kick off in Vancouver on Friday. Finland will face Switzerland in its semifinal.