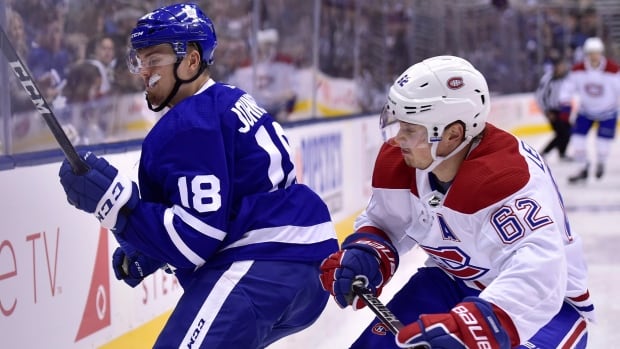 Xavier Ouellet and Artturi Lehkonen each scored twice as the Montreal Canadiens defeated the Toronto Maple Leafs 5-1 in pre-season play on Monday.

Charles Hudon had the other goal for Montreal, which picked up its fourth victory in five exhibition outings. Antti Niemi made 29 stops for the Canadiens, while rookie centre Jesperi Kotkaniemi continued to impress in his bid to make the club with an assist and a plus-3 rating. Joel Armia added two assists.

Kasperi Kapanen replied for Toronto as the Leafs lost for the first time in five pre-season game. Garret Sparks got the start for Toronto, allowing five goals on 36 shots. Sparks is in a battle with Curtis McElhinney and Calvin Pickard to be the backup to Leafs No. 1 netminder Frederik Andersen, but did little to help his cause.

Both teams dressed lineups at Scotiabank Arena filled heavily with players destined for the American Hockey League this season.

With the likes of Auston Matthews, John Tavares, Mitch Marner, Patrick Marleau and Nazem Kadri sitting out, the Leafs’ projected fourth line on opening night of Kapanen, Par Lindholm and Andreas Johnsson was given top billing.

Montreal left Carey Price, Brendan Gallagher, Jonathan Drouin and Tomas Tatar at home, but Kotkaniemi got another look as the club continues to debate what to do with the No. 3 pick from June’s NHL draft — keep the 18-year-old centre, send him to the AHL or return him to his Finnish club.