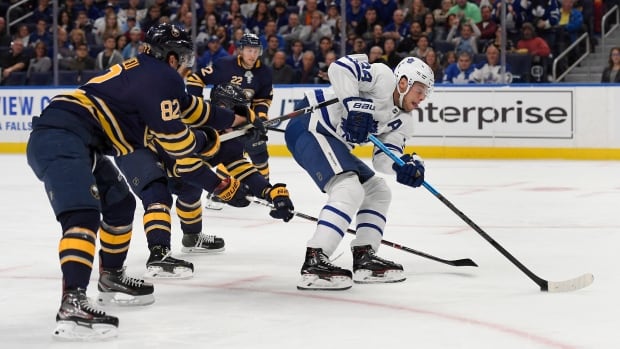 Calle Rosen’s power-play goal midway through the third period was the difference as the Toronto Maple Leafs beat the Buffalo Sabres 3-2 on Saturday to remain undefeated in pre-season play.

Rosen’s point shot through traffic broke a 2-2 tie and moved Toronto to 4-0-0 in exhibition action, including back-to-back wins over the Sabres after a 5-3 victory on Friday in Toronto.

Auston Matthews and Jeremy Bracco also scored for the Maple Leafs. Frederik Andersen stopped 19-of-21 shots before giving way to Calvin Pickard for the third period. Pickard stopped all 14 shots he faced in a busy 20 minutes.

Kyle Okposo and Jeff Skinner scored for the Sabres. Carter Hutton played the entire game and turned away 28-of-31 shots in the defeat.

Okposo opened the scoring 4:17 into the game with his first of the pre-season and it stayed a 1-0 Sabres lead until Matthews responded early in the second period.

Matthews’ second goal of the pre-season was assisted by Tyler Ennis, who is getting a chance on Toronto’s top line with Willliam Nylander out with a contract dispute, and Patrick Marleau.

Tomas Tatar scored early in the third period as the Montreal Canadiens came back from two goals down to defeat the Ottawa Senators 3-2 in pre-season play Saturday.

Brady Tkachuk and Cody Ceci found the back of the net for the visiting Senators. Craig Anderson, making his second pre-season start, stopped 29-of-32 shots.

The Senators remain winless this pre-season (0-4-0).

Montreal scored two goals in 23 seconds to start the third period to complete the comeback.

Byron netted the equalizer with a seemingly harmless wrist shot at 1:18 and Tatar deflected a shot from the point at 1:41 to give Montreal the 3-2 lead.

It was the first pre-season meeting between 2018 first-round draft picks Jepseri Kotkaniemi and Tkachuk.

Tkachuk got the Senators on the board just 1:15 into the game as he beat Price between the pads on a breakaway — Ottawa’s first shot on goal.

Ceci doubled Ottawa’s lead at 17:41 of the second period with a wrist shot from the faceoff dot to Price’s left. Tkachuk won the faceoff that led to Ceci’s goal.

Montreal got one back at the end of the second via a tight-angle shot from Scherbak, who just threw the puck on net from the corner of the ice.

Mark Stone nearly equalized in the game’s final minutes, but his shot rang off the post.