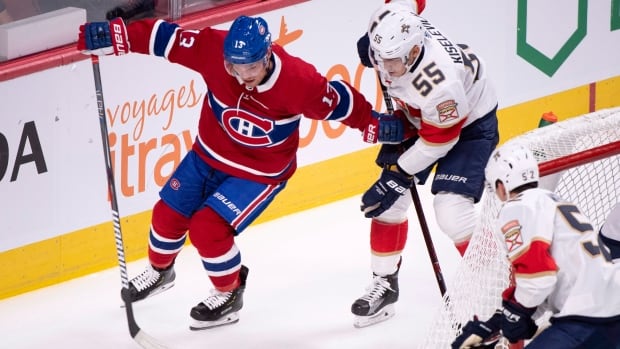 Evgenii Dadonov and Jared McCann each scored twice as the Florida Panthers beat the Montreal Canadiens 5-2 on Wednesday, while Max Domi got handed a match penalty for a bare-handed sucker punch on Aaron Ekblad.

Matthew Peca and Nikita Scherbak scored for the Canadiens. Carey Price played the first half of the game, stopping 20 of 22 shots. Antti Niemi made 16 saves on 18 shots in relief.

Domi, who was acquired in the off-season trade that sent Alex Galchenyuk to Arizona, got a match penalty in the third period after getting tangled up with Ekblad.

With his father watching from the stands — notorious enforcer Tie Domi — the 23-year-old Max sent a bloodied Ekblad to the ice with a punch right on the nose.

Domi was given a minor, major and match penalty on the play.

Dadonov scored his first of the game at 4:32 of the first period on an odd-man rush for the Panthers.

The 29-year-old Russian added his second at 11:07, on the power play, shortly after a shot from Mike Hoffman was blocked in front of goal.

Peca cut the deficit in half with a power-play marker of his own at 13:19. The centreman, making his first pre-season appearance as a Canadien, was lucky to have his shot bounce off two Florida players’ skates and in past Luongo.

After a scoreless second, McCann made it 3-1 at 10:57 of the third period after driving hard to the net and cashing in his own rebound. The 2014 first-round draft pick added his second exactly two minutes later.

Scherbak got one back for Montreal at 15:58 before Bjugstad scored in the empty net with 52 seconds left in the game.

The Canadiens won their first pre-season game 3-1 against a split New Jersey Devil squad on Monday. Florida’s split team lost both their opening games Monday to the Nashville Predators.

Has the NHL torch been passed?

The two teams played Tuesday night in Lucan, Ont., as part of Kraft Hockeyville Canada with Toronto taking a 4-1 victory.

Filip Chlapik had a power-play goal for the Senators.

Goalie Craig Anderson played the first half of the game for Ottawa and allowed one goal on 18 shots before being replaced by Mike McKenna, who gave up two goals on nine shots.

Pre-season games rarely draw big crowds, but it was clear the majority of fans on hand were there to see the Leafs as blue jerseys dominated the crowd.

DeBrusk broke a tie 5:27 into the third period, and Kevan Miller added an empty-netter. The Bruins won the opener 4-3 in a shootout Saturday night in Shenzhen.