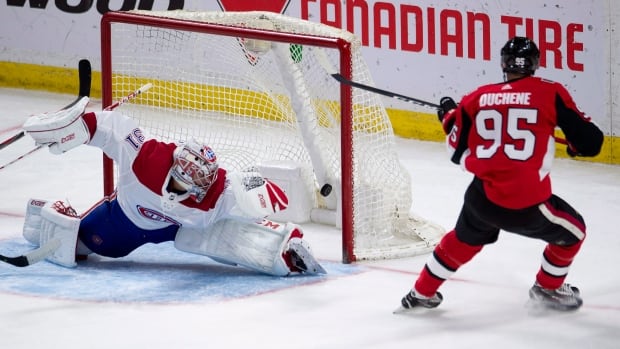 Matt Duchene had a goal and an assist as the Ottawa Senators beat the Montreal Canadiens 3-0 on Saturday night in the final game of the pre-season for both teams.

The Senators wrapped up the pre-season with a 2-4-0 record, while the Canadiens were 4-3-0.

Tom Pyatt and Bobby Ryan also scored for the Senators, while Craig Anderson stopped 19 shots at the Canadian Tire Centre.

Earlier in the day, Senators head coach Guy Boucher told reporters the team would be starting the regular season with the 13 forwards that remain, including rookie Brady Tkachuk and Alex Formenton.

Formenton has been impressive since the start of camp and had a great chance in the third period, but was robbed by Niemi.

Decisions remain to be made on the blueline as the Senators are unsure whether they will carry seven or eight defencemen. A battle remains between Ben Harpur, Maxime Lajoie and Christian Jaros.

The Senators open the season Thursday as they host the Chicago Blackhawks, while the Canadiens start their campaign Wednesday in Toronto.

Oilers come back against Flames

“Especially on my birthday. It makes it that much better,” said Yamamoto before the Oilers took off for Germany, where they will wrap up their pre-season with an exhibition game against the Cologne Sharks on Wednesday.