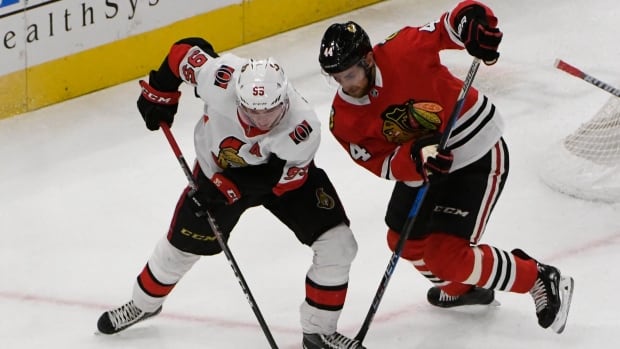 Max McCormick scored the go-ahead goal as the Ottawa Senators beat the Chicago Blackhawks 2-1 on Thursday in pre-season action.

McCormick went to the net and put back a rebound off a Dylan DeMelo point shot 2:58 into the third period to break a 1-1 tie.

Matt Duchene opened the scoring for Ottawa in the second period, evening the score after Jonathan Toews gave Chicago a 1-0 lead in the first.

Mike Condon made 27 saves for the win as Anton Forsberg stopped 21-of-23 shots in a losing cause.

Ottawa’s Bobby Ryan, who has a history of hand injuries, blocked a Duncan Keith point shot with his right hand three minutes into the first and went to the bench in pain. He stayed in the game though and picked up an assist on Duchene’s goal.

Both teams went 0 for 5 on the power play.

Kyle Palmieri and Sami Vatanen each had a goal and assist as the New Jersey Devils picked up their first pre-season win with a 5-3 victory over the Winnipeg Jets on Thursday.

The Devils are 1-2-2 in exhibition play and head to Switzerland for their final pre-season match against SC Bern on Monday. They open the regular season Oct. 6 in Sweden against the Edmonton Oilers as part of the NHL Global Series.

Mathieu Perreault, Kyle Connor and Skyler McKenzie scored for Winnipeg, which wrapped up its pre-season with a 4-3-0 record. Blake Wheeler and Mark Scheifele each had two assists.

Winnipeg native Travis Zajac scored the eventual game-winner, as the New Jersey Devils downed the Winnipeg Jets 5-3 for their first win of the pre-season. 1:50

Keith Kinkaid stopped 21 shots for the Devils, while Connor Hellebuyck made 22 saves for the Jets.

New Jersey held a 2-1 lead after the first period and outshot Winnipeg 12-9.