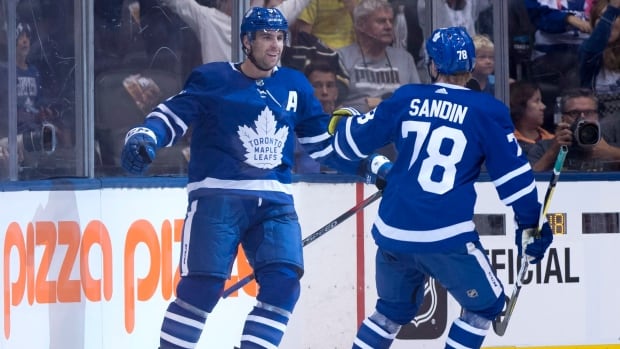 John Tavares scored his first two goals on home ice with the Maple Leafs as Toronto defeated the Buffalo Sabres 5-3 in pre-season play on Friday night.

Ron Hainsey, Pierre Engvall and Chris Mueller also scored for the Leafs. Curtis McElhinney stopped all 20 shots he faced after replacing Garret Sparks, who made nine saves, midway through the second period at the newly-named Scotiabank Arena.

Andrew Oglevie, C.J. Smith and Tage Thompson replied for the Sabres. Linus Ullmark made 27 saves in taking the loss.

The teams will play an exhibition rematch Saturday night in Buffalo.

Oglevie opened the scoring half a minute into the first period when he slid a rebound past Sparks, but Hainsey’s shot through traffic tied it 18 seconds later. Engvall continued the chaotic start 23 seconds after that when he took a pass from Colin Greening and beat Ullmark for a third goal in the game’s first 1:11.

Tavares scored his third goal of the pre-season, but first in Toronto in a Maple Leafs uniform, to give Toronto a 3-1 lead over the Buffalo Sabres. 0:53

Tavares then made it 3-1 with his third of the pre-season at 3:42, finishing off a sequence he started in the Toronto zone. The star centre fed a stretch pass to Marner, who in turn dropped it back to Timothy Liljegren. The rookie defenceman blasted a one-timer at Ullmark, and Tavares was there to bury the rebound upstairs.

Montreal Canadiens forward Max Domi says he regrets punching Florida Panthers defenceman Aaron Ekblad in an incident that cost him a suspension for the remainder of the NHL pre-season.

“I feel bad about it.” Domi said at practice Friday.

“It’s not the way I wanted to handle that. It’s an emotional game. Obviously, I’m an emotional player. But, you know what, I got to suffer the consequences of it. It’s unfortunate, but it is what it is and I definitely respect the league’s decision.

“I’ve known Aaron for a long time. Grew up playing against each other. We always play hard, always battle, whether it was in minor hockey, junior, the national level, and now the NHL, too. By no means did I want to hurt him. I feel bad about it and I hope he’s OK.”

The punch came at the start of the third period of Wednesday’s pre-season game. Domi began tugging on Ekblad’s shirt, asking him to fight. With the Panthers star showing no interest in dropping the gloves, Domi punched him in the face twice, but still Ekblad didn’t respond.

Domi then dropped his right glove and sucker-punched him right on the nose, and the bloodied Ekblad dropped to the ice. Domi was given a minor, major and match penalty on the play.

Domi said he thought he and Ekblad were both going to drop their gloves.

Domi was making his first appearance as a Canadien after coming to Montreal in an off-season trade that sent Alex Galchenyuk to Arizona.

Andreas Martinsen and Dominik Kahun each had a goal and an assist as the Chicago Blackhawks beat the Ottawa Senators 5-2 on Friday for their first win of the pre-season.

Alex Formenton and Matt Duchene scored for the Senators, who are now 0-3-0 in the pre-season. Mike Condon allowed two goals on 11 shots before being replaced by Filip Gustavsson.

Gustavsson was acquired as part of the Derick Brassard trade to the Pittsburgh Penguins last season and was making his Senators debut. The 20-year-old gave up three goals on 17 shots.

Thomas Chabot played his first game of the pre-season. The sophomore defenceman is expected to quarterback the power play and take on added responsibility with the departure of Erik Karlsson.

Ottawa was 1 for 6 with the man advantage.