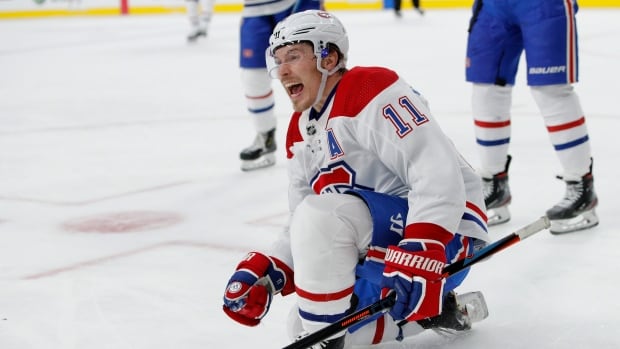 The Montreal Canadiens turned in an eerily similar performance to last season’s win in their game against the Golden Knights in Vegas.

Brendan Gallagher scored his seventh of the season with 1:58 left in regulation, Max Domi scored 27 seconds into overtime and the Canadiens beat Vegas 5-4 on Thursday night.

Last season, Montreal scored with 1:25 left in regulation — and prevailed in OT.

“The guys never gave up,” Montreal coach Claude Julien said. “We knew it was gonna be a tough game, the key was not to get frustrated, just to stick with it and I think we did a good job of that.”

Playing the second of a back-to-back after winning 4-1 in Arizona on Wednesday, the Canadiens fell behind 4-2. The Golden Knights seemed to seize momentum with a third-period surge behind goals by Cody Glass and Mark Stone.

But former Golden Knight Tomas Tatar, who came to Montreal as part of the trade that sent Max Pacioretty to Vegas, cut into the Golden Knights’ lead when he scored off a rebound on a shot by Joel Armia off the post.

“When you’re down by two goals and you’re looking at the clock, it’s a mental game,” Julien said. “But when you score a goal and you’re down by just one and you see that there’s some time left there’s no doubt (Tatar’s goal) gave us some momentum.”

Julien pulled goaltender Keith Kincaid with a little more than two minutes left in regulation, and it took just 21 seconds during a 6-on-5 sequence for Gallagher to take a perfect feed from Armia in the corner and beat Vegas goalie Marc-Andre Fleury between the pads to tie the game at 4-all.

Domi then scored his fourth goal of the season when his shot trickled through the pads of Fleury for the winning goal.

“You want to call it resilience or character — you name it — the team showed a lot tonight,” Domi said. “We didn’t necessarily play the best hockey the first couple of periods, but you know what, good teams find ways to battle through that adversity. Back-to-backs are tough, they’re very, very tough and we found a way to stay with it and (Kincaid) gave us a chance all night and when you get in overtime anything can happen.”

The loss ruined the return of Vegas defenceman Nate Schmidt, who missed 12 games with a lower body injury, and the season-debut of Alex Tuch, who was injured during a preseason game on Sept. 27.

“I don’t think we were that bad,” Golden Knights coach Gerard Gallant said. “I wasn’t totally happy with all of the game, but it was still good enough to win. I don’t think it’s inconsistency; they got some hockey luck in the end. What do you do about that?”

Danault got the scoring going 2:35 into the game when he collected a rebound off a shot by Shea Weber and scored into a wide open net. It marked Weber’s 100th point with the Canadiens. Vegas was the only team he had not registered a point against.

Karlsson tied the game late in the first, and then Tuch ignited the 18,035-sellout crowd by putting Vegas ahead with his first of the season and 90th career point.

Drouin was credited with the only goal of the second period when Vegas defenceman Brayden McNabb knocked the puck into his own goal.

Glass put the Golden Knights in front with his third goal of the season, and less than three minutes later it was Stone netting his team-high eighth goal and 17th point of the season.